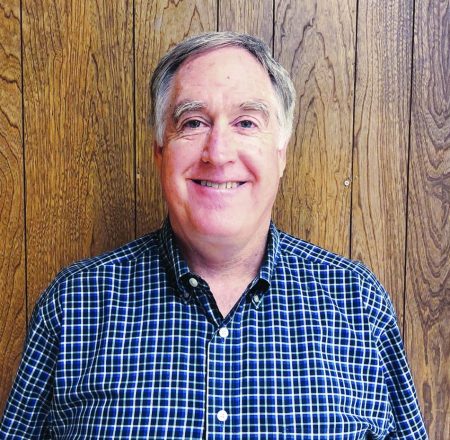 Pathway, a United Methodist Congregation, welcomes their new pastor, Robert Harrison and his wife Pam. Pastor Harrison’s first service will be Sunday. He will be sharing his basic Christian beliefs speaking about the Apostle’s Creed.
Pastor Harrison said that he was happy to get the chance to move to this area because his daughter lives in Oklahoma City, “that means I’m 45 minutes away from my grandkids,” he said. “We are looking forward to working with the Pathway Church and sharing Jesus Christ with the community.” Pastor Harrison is jumping in feet first, too. He plans to help man Pathway’s booth Saturday at Summerfest.
Harrison and his wife have been married 36 years, have two children and two grandchildren. “I grew up on a farm/ranch north of Lindsay Oklahoma. I am a lifelong United Methodist. Growing up, I attended regularly at the Lindsay UMC until my senior year in High School,” explained Pastor Harrison. “However, in college I was not active and lived a very secular life style. In 1985 my wife, Pam, and I participated in a Christian tour of Israel, Jordan and Egypt during that trip I rededicated my life to Jesus. Upon returning home, I began to read the Bible and take my faith seriously.”
Over the next several years along with studying the Bible, Harrison taught Sunday School, went on a Walk to Emmaus, and became a Lay Speakerd (a substitute pastor.) “In the mid-1990’s I began to feel the call from God to seek full time ministry, but due to a number of family and personal circumstances, I still doubted the call. However, in the early 2000’s after much prayer and contemplation the call was too real to ignore and I began the inquiry process to become a pastor,” said Pastor Harrison.
From 2005 to 2010, he was a part-time local pastor at Paoli. From Sept. of 2010 until June of 2013, he assisted in the Lindsay United Methodist Church, as a licensed local pastor not under appointment, and worked on finishing his Master of Divinity through Asbury Seminary, in Wilmore, Kent. Pastor Harrison graduated from Asbury Seminary in January of 2014.
“In 2013, we moved to Okeene where I pastored in the United Methodist Church,” said Pastor Harrison. “In 2016, we moved to Beaver where I currently pastor in both Beaver and Forgan. All of the Churches where I have served have inspired, encouraged and supported me, and I am ever grateful for the experiences and life long memories made with each congregation. In 2018, I was ordained an elder in Full Connection of the Oklahoma Annual Conference.”
In the past, Pastor Harrison was a petroleum landman, banker, college instructor, briefing attorney for a Federal District Judge, and lawyer. He practiced law in Altus for about seven years before moving back to Lindsay in 1998 where I worked with his dad in the family business. “While in Altus, I was a Lay Speaker, Sr. High Sunday School teacher and active on several church committees. During our time in Lindsay, I was on numerous committees in the Lindsay UMC including being the Lay Leader for three years and the Ardmore District Lay Speaker Coordinator for three years,” he said “During our time in Okeene, we made progress in several areas of ministry. We added a praise band to our traditional worship service. We began Sunday night small groups and had several church wide Bible studies. As a church we actively participated in several Okeene Ministerial Alliance projects, including the local Food Pantry and the local thrift store.”
Proud of where he’s been, Pastor Harrison explained recent successes at the churches he pastored. “During our time with Beaver and Forgan we have continued to expand our ministry in several ways. Our Beaver Worship services are available on Facebook each week, which has allowed us to reach out to many people, who either do not attend church, or are unable to attend. Both Beaver and Forgan actively serve meals at the OPSU Wesley Foundation. Several members of the Beaver congregation, including Pam and myself, are mentors at the local elementary school. In addition, several men in both congregations participate in both a local Son’s of Thunder outreach ministry and Men’s devotional breakfasts. We continue to have regular church wide Bible studies,” said Pastor Harrison. “We actively participate in the local Beaver County Ministerial Fellowship. Currently, I am Secretary for the Standing Rules Committee and a member of the Board of Trustees of the Oklahoma Annual Conference. Finally, I actively participate in the Kiaros Prison ministry and find it to be an important ministry of sharing Jesus Christ with the forgotten people in prison. I look forward to serving with you while we help spread the Gospel of Jesus Christ.”
On Sunday, July 5 and Sunday, July 12, he will be sharing about the Bible, “where I’m coming from, my background, beliefs and where I am ministering from.” Pathway, a United Methodist Congregation will host a welcome breakfast and “pounding” at 10 a.m. for Pastor Harrison and his wife. A “pounding” is an old fashioned way to welcome someone new to the community, a housewarming, of sorts. Suggested items are a “pound” of non-perishable items or household items. Sunday morning services begin at 11 a.m.