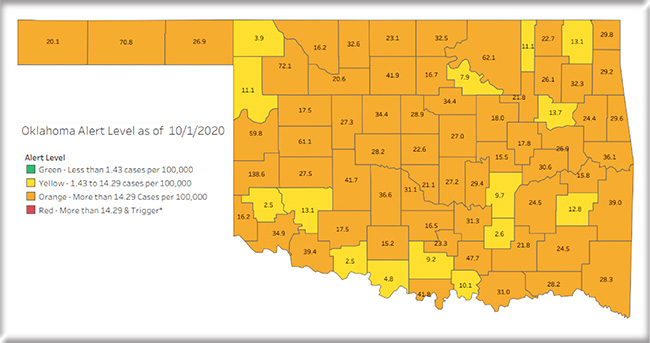 The above graph displays the number ofcases reported for a given county by date. The circles represent the estimated cases per 100,000 population (US Census 2019 est) based on a 7 day average. Colors indicate the risk level. Colors indicate Risk Levels. Details and labels are shown for County. *If a County resides in a Region that has met one or more of the thresholds listed below that County will be elevated one Risk Level. 1. Region has reached maximum hospital capacity (defined as activation of contracted beds pursuant to state hospital surge plan or 100% of the average of licensed and staffed beds) AND at least 50% of contracted hospital beds under surge plan are filled. OR 2.Average days of statewide PPE on hand and available is

Numbers of active cases of COVID-19 have increased for all five counties surrounding Davis in the last seven days. This has driven the total for the five-county area up to 373. Last week that number was 281.
An outbreak in Sulphur drove the Murray County number to 46 active cases, up from 30 a week ago. Sulphur’s number rose from 22 to 36 in that span. Davis had nine active cases on Tuesday’s update from the Oklahoma State Department of Health, up from seven last week.
All five counties in the area saw a rise of at least 14 active cases over the last seven days. Pontotoc County leads the way with 111, Carter has 88, Garvin has 67, Johnston now has 61 active Coronavirus cases.
Some towns have a more noticeable rise in cases than others. Ardmore went from 51 to 74 and Sulphur rose from 23 to 36. Wynnewood nearly doubled from eight to 15 and Stratford more than doubled from just five to now 11 cases. Percentage-wise no town saw a spike like Mill Creek, going from just two active cases to nine this week, a 350 percent increase.
In some good news, the statewide number of active cases actually fell over the past week from 13,244 to 13,061. That marks the first time in months the statewide number of active cases dropped from one Tuesday to the next.
For now, the numbers are holding down pretty well in Davis. Currently, both Mill Creek and Allen, towns with much smaller population than Davis, have the same number of cases as Davis.
The list of towns in our five-county area with more cases include: Ada (94), Ardmore (74), Sulphur (36), Tishomingo (30), Pauls Valley (15), Wynnewood (15), Stratford (11) and Lone Grove (10). These towns are not listed to criticize them or tout some accomplishment here, but it does provide Davis citizens with an opportunity to be grateful for where we stand. It also carries with it a warning of how quickly things can turn if residents don’t continue to be careful at school, work and other activities. 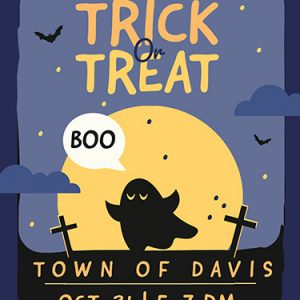 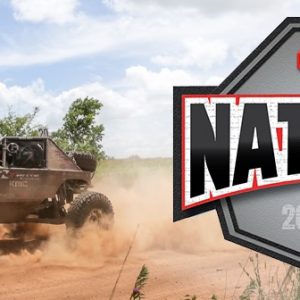 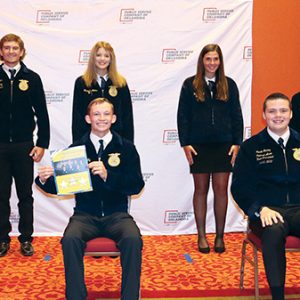 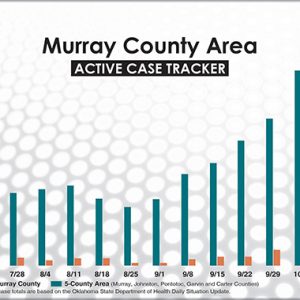 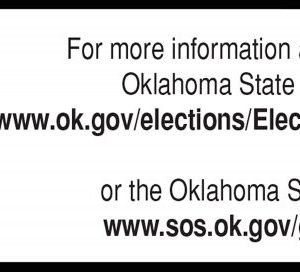