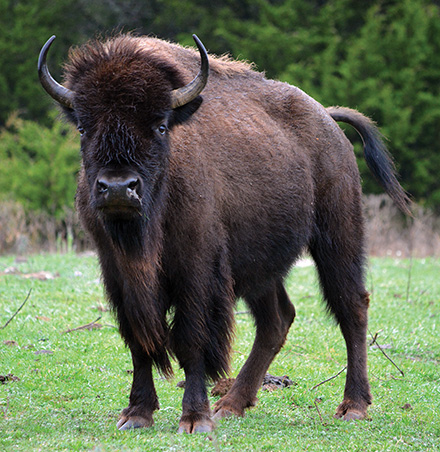 Enclosure makover. Construction efforts will begin this fall on the Bison enclosure at Chickasaw National Recreation Area in Sulphur.

Work on Chickasaw National Recreation Area’s new bison enclosure is scheduled to begin in late October. Planning for this project began in 2017. Work scheduled for this fall includes surveying and staking the fence line, as well as some vegetation removal to prepare the site for fencing.
Visitors to the park may see machinery in the area as preparation work takes place. Fence construction is scheduled to begin in the spring.
The park bison herd was first established in February 1920, when three bison were brought to the park from Wichita Mountains National Wildlife Refuge and housed in a small pasture near Pavilion Springs. In 1933, the Civilian Conservation Corps began work on an 84 acre bison pasture, and the herd was moved to that location the following year, where they have lived ever since.
“We’ve had our bison herd in the same pasture for 86 years,” says Superintendent Bill Wright, “which is a long time to have such large animals in one place. We are building a new pasture on the other side of the highway, not as a replacement, but as a second pasture we can use to rotate the animals to and from. This will let us better manage the land in both areas for the benefit of the bison.”
The new enclosure will be 42 acres, and although smaller in size, has more grazeland available than the current pasture. Once the bison are relocated to the new pasture, park staff will be able to perform much needed prairie restoration work in the current enclosure to benefit this native species.
To learn more about how the National Park Service and the Department of the Interior manage 19 bison herds in 12 states, including the herd at Chickasaw National Recreation Area, visit https://www.nps.gov/subjects/bison/protecting-bison.htm.
For more information about Chickasaw National Recreation Area, visit www.nps.gov/chic or call the Travertine Nature Center at (580) 622-7234.