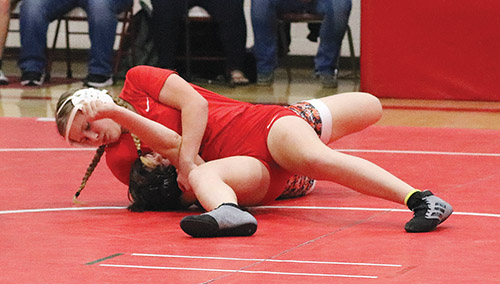 State-bound. Kallee Boatwright used a headlock for a pin in Davis’ home dual against Lexington on Jan. 26. She used it again for the first of three wins at the girls West Regional tournament that landed her in third place and on the 2021 state tournament bracket at 118 pounds. Boatwright will be 14-1 on the season when the state tournament begins on Feb. 25.

By Shane Bennett
The wrestling postseason is upon us and the Davis bunch was neck-deep in it this past week with the Davis girls going to regionals and the junior high boys wrestling at All State. Kallee Boatwright and Daityn Webb both placed third and qualified for the state tournament in girls wrestling. For the junior high boys, seventh place was the best finish for any of the Wolves in the All-Class event.
Girls Regionals
At Norman High School on Monday, Boatwright entered the tournament with an undefeated record at 11-0 and was seeded third in the 118-pound bracket. She used a headlock to notch a fall in just 22 seconds in her first match and advanced to the championship semifinal.
Boatwright went into the third period before losing by fall in the semifinal. Then, she used her physicality in her next two matches to pull out second-period pins and punch her ticket to the state tournament.
Webb entered regionals unseeded and knocked off the third and fourth seeds to earn her place at state. She won her first match by a 7-4 decision and went all three periods in the semifinals. Facing a familiar foe from Noble, a girl that has beaten Webb multiple times this year, Webb fell behind 2-1 on a reversal in the second period. She got in on a few shots in the third period but couldn’t finish them, missing the regional finals by one point.
In the consolation match later in the day she used a good scramble in the second period to put the Edmond Memorial wrestler on her back and went on to win, 12-7. Webb then won third place in a 6-4 decision over a girl from Watonga that had beaten her earlier in the season. She now carries a 13-5 record into the state tournament.
Jaylee Jennings one of her three matches on the day. She drew the number four seed and lost her first match at 107-pounds. Then, she bounced back with an impressive second bout. Jennings scored two takedowns and put the Guthrie wrestler on her back twice in the second period. She was leading 7-0 when she registered the fall.
Jennings ended the season with a 5-7 record but was excited to get back to work and make another run at state next year.
“This is really the first year for the girls to have this intensity of having to win to get in to State,” said Davis head coach Gene Bennett. “It was a great experience for all of our girls and I was really impressed with how Kallee and Daityn didn’t just settle for being in the state tournament. In their third place matches they both got after it.”
The Davis duo will now have a little more than two weeks to prepare for the state tournament. It will be a one-day event at the Oklahoma State Fairground Arena in Oklahoma City on Feb. 25. Just like Regionals, there are no class divisions in girls wrestling and schools of all sizes will compete for titles in each of the 10 weight classes.
Junior High All State
At Junior High All State there are also no class divisions and schools can enter multiple wrestlers at each weight. This sets up a massive event which took place this year on Feb. 5-6. Six different Davis wrestlers won more matches than they lost, but none finished in the top six at their weight classes.
Baer Webb pushed through some nagging injuries to finish the season and wrestled to a seventh-place finish at 113-pounds. He had to win six matches to do it, going 6-2 for the tournament. Ethan May was also impressive, going 4-2 at 128.
Jett Jennings, Mitchell Garrison, Mason Tomlinson and Kolten Rawls all went 3-2 at their respective weight class for the Wolves. Brendan Rawls and Jeremiah Jones also won matches for Davis with Rawls going 2-2 and Jones finishing 1-2.
High School Boys
The high school boys will be on the road to Plainview for the 3A West Regional on Friday and Saturday. Seven of the weight classes will compete from start to finish on Friday and the other seven on Saturday. Which weight classes will compete on which day will be decided at the coaches meeting on Wednesday night.