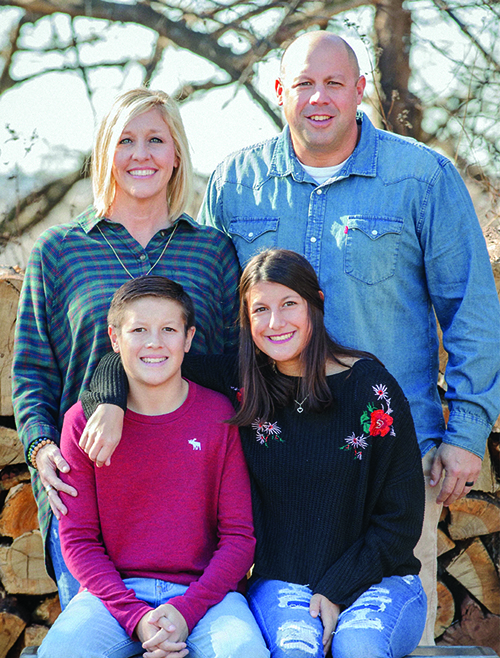 The family business. Davis Middle School principal Jeff Jennings is supported by his wife Jodi and his kids, Jet and Jaylee while he follows in the footsteps of his grandfather, who was also a school administrator.

By Dana Lance
Davis Middle School Principal Jeff Jennings was influenced to pursue a career in education by his Chickasaw grandfather, Robert Jennings Jr., who taught at the same school for 36 years.
As a youngster, Mr. Jennings repeatedly took notice of the positive rapport his grandfather had with Davis residents as the two were running errands in town.
“Watching him interact with students, former students and others in the community, I could tell he made a difference in people’s lives and was a big part of the community.  I knew early on that I wanted to do the same thing,” Mr. Jennings said.
After graduating from Davis High School in 1997, Mr. Jennings began working toward a degree in Education at Southeastern Oklahoma State University, Durant, before transferring to East Central University, Ada, where he earned a bachelor’s and master’s degree in Education.
He credits the Chickasaw Nation for the incentive and support to complete both degrees.
“The Chickasaw Nation has helped me tremendously.  The tribe has motivated me to continue my education with college and helped me work toward both of my degrees.  They made that process so much easier for me and my family.
“The financial aid and scholarship programs were so beneficial to me graduating.  I have so much appreciation for the Chickasaw Nation for supporting me.”
Mr. Jennings taught at Dickson and Velma-Alma schools before accepting the position of principal at Davis in 2009 and continuing his grandfather’s legacy at the school.
His grandfather taught business courses at Davis Schools after being honorably discharged from the U. S. Army and earning a bachelor’s degree from Southeastern Oklahoma State University. He later obtained a master’s degree from the University of Oklahoma. He retired from Davis in 1984.
In addition to his role as principal, Mr. Jennings also serves as the school’s JOM (Johnson O’ Malley) coordinator. A federal program, JOM is designed to supplement the educational needs of eligible First American and Alaska Native students. JOM programs offered to students will vary and may include, but are not limited to, programs in culture, language, academics and dropout prevention.
Mr. Jennings works with a committee comprised of parents of eligible students to determine the needs for the Davis program. “Every decision the parent committee and I make is for our Native students. We search for ideas that will not only benefit students now, but also help them with their future. We want to do whatever we can to motivate and encourage our students to continue to work toward their goals. Having pride in your heritage is very important to us and we want to get that message out to the public,” he said.
Mr. Jennings is also able to share his Chickasaw heritage with students in the classroom and the importance of a “Can Do” spirit with student athletes, just as his numerous Chickasaw family members did with him and a bevy of cousins.
“I’m from a huge family of Chickasaw citizens. My grandfather had six siblings, which gave me a lot of great aunts and uncles. We have family reunions yearly and the elders are all very involved with the tribe and proud of being Chickasaw, he said.
“They have done a great job teaching the younger generations about being proud of our heritage and taking pride in being Chickasaw.   This is something that has shaped not only me, but my cousins as well.
“As a family, we know how important our heritage is and do our best to pass our Chickasaw pride down to our younger children, the same way it was to us,” he said.
Working with the JOM program also gives Mr. Jennings an opportunity to stay connected to the Chickasaw Nation, with student field trips to the Chickasaw Nation Annual Meeting and Festival in Tishomingo and the Chickasaw Cultural Center in Sulphur.
In addition to assistance through the JOM program, Mr. Jennings is thankful for the Chickasaw Nation’s contributions to the Davis community, including a 2015 renovation of the school auditorium.
“It was such an upgrade and our school is proud of it.  It would not have been possible without the contributions from the Chickasaw Nation,” he said.
The Dorothy Jameson Performing Arts Center’s auditorium is now known as Nashoba Aaittafama (“A Gathering Place for Wolves”) and honors Chickasaw Hall of Fame member and 1942 Davis graduate Irene Digby.
Mr. Jennings also noted the positive impact the Chickasaw Nation has on the Davis community with numerous job opportunities and services for Chickasaw citizens.
The best part of his job is being a part of his close-knit hometown community, he said.
He compliments his staff, describing educating the next generation as a “family effort.”
“Together, we get to be around young people all day which keeps us motivated and young ourselves.   To me, it’s not a job to be around young people every day, it’s a privilege.”
Mr. Jennings lives in Davis with his wife, Jodi.  The couple has two children, Jaylee, 18, a Davis High School junior, and Jett, 15, who is in 8th grade at Davis Middle School.  His parents are Jeanie Jennings and the late Roger Jennings.
“All (family members) are so supportive of me and I’m very thankful for them.”
He is also thankful to be Chickasaw.
“I’m blessed to be a Chickasaw citizen. There is so much pride that comes from being a citizen of the Chickasaw Nation. It means that you are recognized and supported by a larger family outside of your own. It is an honor when someone asks if you are a Native and an even bigger honor to say you are Chickasaw. I’m so thankful for my tribe and all the things my tribe has done for me.”