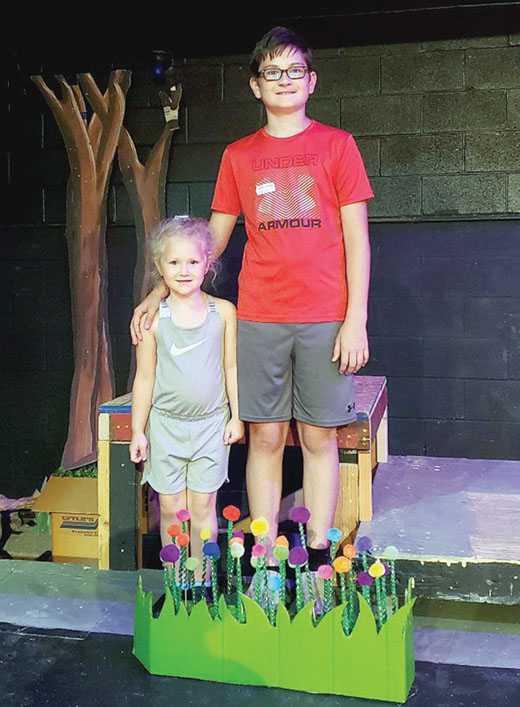 On the stage. Bayler Blair (left) and Cameron Hoffman, both of Davis, portray citizens of Whoville, a community threatened with annihilation in the kids musical, “Seussical Jr.” being staged this weekend at the Goddard Center by Ardmore Little Theatre. The play will be presented on Thursday and Friday at 7 p.m., with performances at 2:30 p.m. on Saturday and Sunday.

Ardmore  Little Theatre returns to the stage this week with four performances of the musical, “Seussical Jr.”
Sixty kids, ages 5-13, from Ardmore and 11 surrounding communities, perform in the show which is drawn from the famed works of Dr. Seuss, with the title blending the author’s name with ‘musical.’ The music and book for ‘Seussical Jr.,’ are by Stephen Flaherty, with book and lyrics by Lynn Ahrens.
This fun and fabulous theatrical montage weaves together characters, places and situations from 15 Dr, Seuss books, including the Cat in the Hat, Horton the Elephant, Gertrude McFuzz, Mazie LaBird,  the Grinch, Whoville, Circus McGurkus, Yertle the Turtle, the Jungle of Nool, and others to create an exceedingly entertaining event.
Performances will be Thursday through Sunday, June 24-27 at the Goddard Center. Thursday and Friday performances will be at 7 p.m., with Saturday and Sunday performances at 2:30 p.m.
Wendy Chamberlain, who directs the production, served as music director for several recent ALT youth shows , including “Shrek the Musical Jr.,” “Beauty and the Beast  Jr.” and “Aladdin Kids.” Formerly music teacher at Oak Hall Episcopal School, Chamberlain now teaches at Plainview Elementary.
Assistant director is Jenna Elmer who will teach music at Oak Hall in the fall semester. Choreography is led by Andrea Shahan, who will teach music at Dickson Schools. Nathanael Durbin is stage manager, a post he has held for most of ALT’s recent kids shows.
Besides Ardmore, participants are from Lone Grove, Wilson, Healdton, Ringling, Overbrook, Marietta, Springer, Davis, Sulphur, Dickson and Mannsville.
Principal characters include, from Ardmore unless otherwise noted, Gracie Cunningham as JoJo, Joshua Nowell as Cat in the Hat, Ethan Eads as Horton the Elephant, Cameron Hoffman of Davis as the Mayor of Whoville, Kathleen Kowalchuk as Mrs. Mayor, Kailyn Smith as Gertrude McFuzz, Italey Brantley as Mayzie La Bird, Naly Griffith as Sour Kangaroo, Caitlyn Pfrehm as Young Kangaroo and Jonathan Mathis of Overbrook as Yertle the Turtle.
There are also groups of performers in the Ensemble, the Bird Girls, the Wickersham Brpthers, the families of Whoville, the Nurses, Jungle Citizens, Fish, Hunters, Circus Animals  and lesser character roles, with the whole company performing in several large numbers.
Tickets are available online through the Ardmore Little Theatre web page or by calling (580) 223-6387. Adult tickets are $8 or $5 for students and children. Persons not vaccinated for Covid-19 are requested to wear face-masks and respect social distancing. 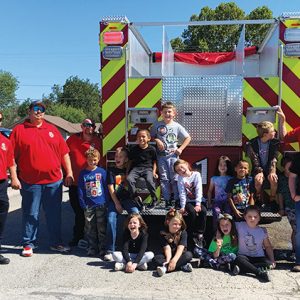