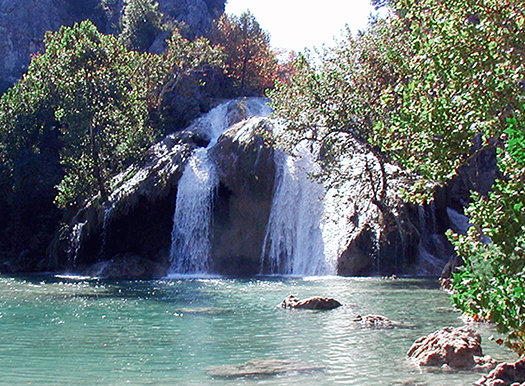 A missing man at Turner Falls Park on Aug. 7 brought together over 20 first responders with a search going into day two, only to find him in Ardmore.
Davis Officer Ryan Thomas said he was approached by a woman letting him know that a member of their party said he was going on a hike and didn’t meet them at the designated spot at 4 p.m. It was now 5:30 p.m.
Davis Police Chief Dan Cooper said that Davis officers and staff took to Turner Falls Park trails to see if they could find him. The man, Joshua Lambert, had left his phone, wallet and keys with friends. The members of the party said he seemed happy when he left for the hike.
Assistant Police Chief Dee Gregory arrived and helped coordinate search efforts that ended around midnight on Aug. 8.
Oklahoma Highway Patrol Dive Team cleared the Falls swimming area around 10 a.m. on Sunday morning as first responders continued to search for Lambert.
Around 11:30 a.m., Oklahoma Bureau of Narcotics officers, Smokey Valley Fire Department, Carter County Search and Rescue Teams, Davis Fire Department, Murray County EMS, Davis Emergency Management, Arbuckle Mountain Grotto Club, members of the Coffey family, Cross Bar Search and Rescue volunteers and a search dog from the Ardmore Fire Department all gathered to re-assess the situation and continued search efforts.
Around 4:30 p.m. it was determined that Lambert had been missing for 24 hours and a BOLO was issued.
In an unexpected turn of events, an Ardmore police officer made contact with a man at Loves on 12th Street and I-35 in Ardmore that claimed to be Lambert. Offficer Thomas went to Ardmore to pick him up and take him back to Turner Falls. He was medically cleared by EMS upon his return.
Lambert later told first responders that he didn’t know where he was in Turner Falls Park on his hike. He exited the park and walked to the Curio Shop. He said he must have “blacked out,” because the next thing he remembered was he caught a ride with a man that dropped him off in Marietta. He said he stayed overnight and a Park Ranger dropped him off at Loves in Ardmore. Later, it was determined that Lambert said he was facing personal issues and he wanted to “he wanted to start over and go meet someone who did not know his name in Texas.”