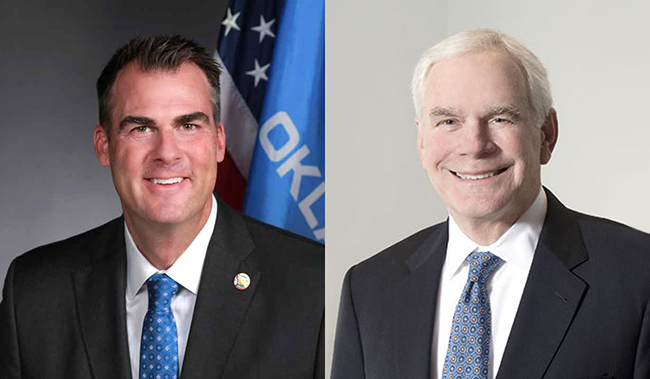 Attorney General John O’Connor and Governor Kevin Stitt today released the following statements following the unanimous ruling by the Oklahoma Court of Criminal Appeals that the McGirt case does not apply to convictions retroactively.
Attorney General O’Connor
“This is a significant victory of the people of Oklahoma. I commend the judges who voted in agreement with our position,” Attorney General O’Connor said. “There are thousands of cases that would have to be retried if the State had lost this case.  In many of those cases, the crimes were committed long ago. Witnesses may be gone.  Evidence may be lost. Re-prosecution might be barred by statutes of limitations. That is why I appreciate the judges who stood up for the rule of law and protecting victims that would have been revictimized by another trial, and possibly re-victimized if their abuser is set free.”
“This is a day where justice for some of the victims was restored. We are all safer because a significant number of perpetrators will remain behind bars. Make no mistake, McGirt will continue to have disastrous effects throughout the State even despite this latest ruling. But today is nonetheless an important victory for the people of Oklahoma.”
Governor Stitt
“Today (Aug. 12) is a major win for victims of crime and public safety in Oklahoma. I am pleased that the Court agreed that retroactively applying McGirt to tens of thousands of cases would unnecessarily traumatize victims and give dangerous criminals opportunities to fall through the cracks. While today’s ruling is a significant step forward, McGirt still presents major challenges that threaten the future of Oklahoma. I will continue to work to protect the state’s sovereignty and ensure equal protection under the law for all 4 million Oklahomans.”