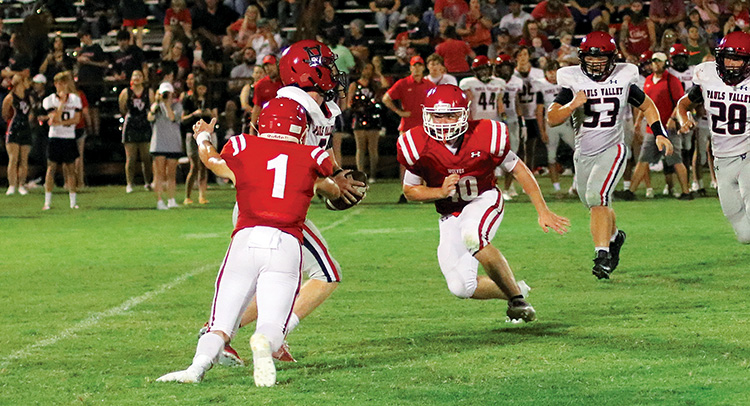 Crunch. Davis defenders Eathin Kennedy (1) and Chase Stewart combined for a loud, 9-yard sack of Pauls Valley quarterback Justin Humphrey on Sept. 3. The play came on fourth down, resulting in a turnover on downs in Pauls Valley territory late in the third quarter of the Wolves’ 12-7 home win to open the season.

The first game of the Wolves’ 2021 season was about the most lopsided five-point game that fans will ever see. The ground and pound Davis offense controlled the game, while its defense stifled the visiting Panthers throughout the night at Wolf Field on Sept. 3.
A 99-yard touchdown run with 4:47 left in the game was the only reason Pauls Valley even had a chance. The Wolves were able to run out the clock, though, and put away a 12-7 victory to start the season.
In the first half Davis played an extreme game of keep away. In just two drives, the home team hogged the ball for nearly 17 of the 24 minutes on the clock. Both resulted in touchdowns to give the Wolves a double-digit lead by intermission.
Davis received the opening kickoff and began churning toward the Panther endzone. Fullback Lane Rawls was the workhorse on the game’s opening drive. He carried on five of the first six plays of the game. It took all four downs to earn the first, first-down of the season, but on fourth-and-one at his own 24 yard-line, head coach Greg Parker showed moxy and his team made him look smart with a two-yard quarterback sneak to get the drive rolling.
That was the fourth play of a whopping 16-play drive that covered 85 yards in 7:59. Rawls racked up 41 yards on 9 carries, including the one-yard score as he flipped over a Panther defender into the south endzone to give the Wolves the lead.
“It felt great to get that first score,” Rawls said after the game. “I knew I was probably gonna get a lot of carries. I was just hoping I was in shape for it.”
Rawls would finish with 110 yards rushing on 25 totes. On the opening drive, Jake Britt added 13-yard run on a counter play to convert a third-and-9 and get the Wolves across midfield for the first time. The biggest play on the drive was a pass play from quarterback Tuff Hammons to tight end Spencer Clinton.
Hammons made a play fake, rolled left and lobbed deep to Clinton, who came open on a corner route. The sophomore hauled the pass in, worked a toe tap on the sideline and picked up a huge first-and-goal at the Pauls Valley 5.
“When they blitzed I knew I would have an opportunity,” Clinton recalled. “I had now idea where I was with the line, but it was a great throw by Tuff.”
“The guys up front executing on run plays is what led to that pass being open,” Hammons insisted after the game. “I was really proud of how they played tonight.”
A two-point conversion run failed, so the Wolves led just 6-0. After the kickoff, the visitors started at their own 40. They picked up a first down, but the Davis defense ultimately held them to just a three-yard drive and forced them to punt.
The Wolves’ second drive started on their 35 and was unfolded similarly to the first. It was a 15-play, 65-yard scoring drive that took another 8:53 off the clock. There was more diversity in the second drive, though with carries by Rawls, Britt, Jeston Idleman, Drew Parks, Eathin Kennedy and quarterback Tuff Hammons, who scored the touchdown.
The longest play of the drive was a 16-yard to the newcomer, Kennedy. He came around the right end on a toss and picked up a block in space from Britt to get all the way down to the four yard-line.
On fourth-and-goal from the two, Hammons punched it in for the score. A two-point pass play fell incomplete, but with just 2:55 to play in the first half, Davis led 12-0.
Pauls Valley’s next possession moved across midfield before the Wolves rose up for the stop. On second down at the Davis 42, Cody Caraway laid the lumber to a receiver, jarring loose what would’ve been a first-down completion. Then, on third down, Levi Baxter and Kobe England combined for a sack, pushing the Panthers to fourth down with just 1:06 left in the half.
On fourth down, the visitors dialed up a screen pass, but Davis wasn’t fooled. Britt read it perfectly and came knifing under the block to hit the Panther receiver right after the catch. Drew Parks came in to clean up the tackle and stop the Panthers a yard short of the first down.
“As soon as I saw the lineman coming to block me I knew it was a screen,” Britt said after the game. “I just got under the block and tried to make the tackle.” 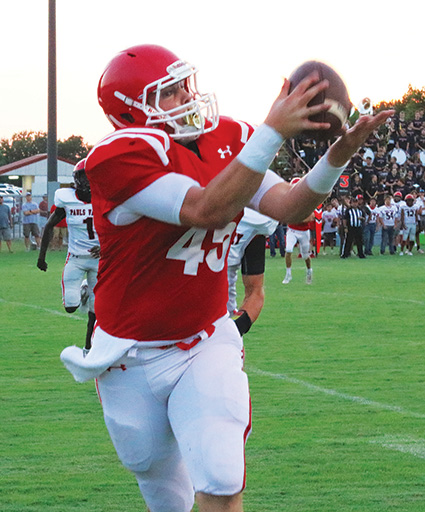 Dual-threat player. Davis sophomore tight end Spencer Clinton enjoyed a successful debut in the Wolves’ lineup both as a blocker on Davis’ 60 running plays and on this 20-yard catch on the sideline at the 5 yard-line to set up the first Davis touchdown of the season.

With that turnover on downs Davis eliminated one of the only threats of the night by Pauls Valley. In the entire game, the visitors took just six snaps on the Davis side of the 50 yard-line.
“Our defense played lights tonight,” Parker said when it was over. “They did a great job all night.”
The Davis defense didn’t have to play much in the first half as Pauls Valley had only two possessions and ran just 14 total plays before intermission.
The visitors started the second half with the ball and went to the air . . . . and paid for it. On the third play, Caraway stepped in front of a deep crossing route and picked off the Panther pass.
“I think he was running a post and I was guarding him and then I looked back and the ball was right there,” Caraway said.
His interception got the ball back to the offense at their own 23 yard-line. Davis picked up two first-down, but then stalled at the Pauls Valley 42 and had to punt. A short punt saw Pauls Valley take over at its own 37, but again, the Wolf defense held its ground. The Panthers moved out to midfield before back-to-back incompletions brought up fourth down.
The visitors dropped back to pass, but good coverage downfield and a relentless pass rush foiled the play. Kennedy and Chase Stewart converged on the Panther quarterback for a nine-yard sack and another turnover on downs.
Davis took over at the Panther 41 for its best field position of the night, but couldn’t do anything with it. A three-and-out resulted in a punt down to the Panther 11. Pauls Valley ripped off a few chunk plays before facing fourth-and-2 at its 46 yard-line.
Still trailing by two touchdowns on the first play of the fourth quarter, the visitors were running out of time and elected to go for it. Quarterback Justin Humphrey started in the shot gun, before running up to the line quickly to run a quarterback sneak. Just before the snap, the Wolf defenders came crowding the line of scrimmage as well and stuffed the play.
“That was just a senior linebacker in Drew Parks recognizing that and knowing they only run wishbone plays or quarterback sneaks from under center,” Parker said after the game. “He was the one that clued in our defense on that one.”

The defensive line and linebackers held up the play before Rawls came through the pile to get ahold of Humphrey and bring him down.
“We knew when he came up under center it was gonna be a sneak and I just threw guys out the way to get to him,” Rawls recalled.
The Red-and White took over at the Pauls Valley 46 and looked to put the game away. Back-to-back gashing runs of 20 yards by Hammons and 8 yards by Rawls keyed the drive, which went all the way to the goal-line.
On fourth-and-goal from the five, Britt took a pitch off the left end and bolted for the corner of the endzone. A Panther defender met him around the three yard-line and they went to the ground on the sideline, taking out the pilon on the front corner of the endzone. To the hometown crowd, it looked a touchdown to put the game on ice . . . . but it wasn’t.
The official spotted him down a foot short of the goal-line for a turnover on downs.
“Honestly, I’m not sure that I got into the endzone,” Britt admitted after the game. “I didn’t want to extend the ball because I didn’t want to fumble it.”
With just 5:00 left in the game, a touchdown would’ve pretty much ended it. Placing the ball on the one was the next best thing. Like a perfect punt, it would force the Panthers to drive as long as possible to do something they hadn’t done in the entire game.
The game turned on dime, though as Humphrey took a quarterback keeper through a crease inside. He then bounced to the outside, turned on the jets and outran all the Davis defenders for an unbelievable, 99-yard touchdown run.
“I really wanted to put the game away, but when we didn’t score I thought at least they would have to go 99,” Parker said later. “Then I saw him break into our secondary and I realized, they just went 99.”
After controlling the clock and the action for 19 minutes of the game, with 4:47 remaining, they were just one tragic play away from a loss.
Then Pauls Valley lined up for an onside kick. Davis had it’s “hands” team on the field to recover it and Seth Knapp came up with the recovery to give the Wolves possession.
Pauls Valley wouldn’t see the ball again as Davis picked up three first downs and ran out the clock for the win.
When the dust settled, Hammons had 20 carries for 58 yards to go along with the 25 carries by Rawls. In all, Davis had 60 rushing attempts on the night, evidence of the success of it’s offensive line.
The unit, comprised of starters England, Baxter, Kavan Bolding, Gavin Moore and Connor Mohr controlled the line of scrimmage and drove the Panthers back all night.
“Our offensive line, and that includes Spencer Clinton our Tight end, just dominated all game,” Parker recalled. “Just like coach (Jerry) Raper always used to say ‘if you can control the clock and don’t turn the ball over you’re usually gonna win.’”
That’s what Davis was able to do in week one and begins the year 1-0. The Wolves will be back at home in week two for Murray County Bedlam against Sulphur.
Sulphur comes in with a lot of talent, but so far, no wins. The Bulldogs fell to Tuttle in zero week, 28-0. Then, they lost to Washington on Sept. 3, 34-13. Both opponents figure to make deep playoff runs in Classes 4A and 2A, respectively.
“Sulphur looks just like they always do if you ask me,” Parker said, looking ahead to the matchup. “They have several good backs, an aggressive, attacking defense and they’re big and physical up front.”
Sulphur figures to be Davis’ toughest test before district play and a good measuring stick as the Wolves look ahead to the best teams in their district. As good as it looked in week one, the Davis team will likely have to be better to earn a win in week two.
Kickoff is set for 7:30 p.m. at Wolf Field on Friday.
Game Summary
Team              1    2    3    4 – F
Davis              6    6    0    0 – 12
Pauls Valley   0    0    0    7 – 7
Scoring Summary
D – Lane Rawls 1 run. (Run failed), 6-0
D – Tuff Hammons 2 run. (Pass failed), 12-0
P – Justin Humphrey 99 run. (Juan Amaya kick), 12-6
Team Stats
Davis                       Pauls Valley
16           First Downs            6
262         Total Offense        206
1/4/0      Comp./att./int.      6/10/1
60-242    Rushes-yds.      19-136
20          Passing Yards        70
2-0         Fumbles-lost         1-0
4-20       Penalties-yds.       5-40
2-16.5       Punts-avg.         1-20 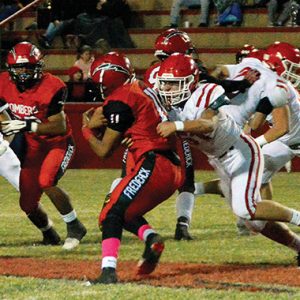 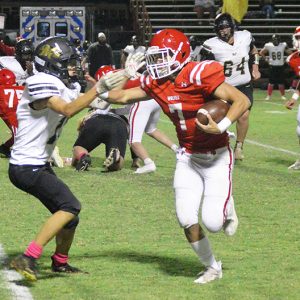 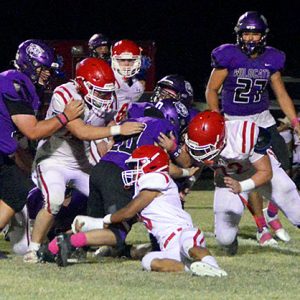 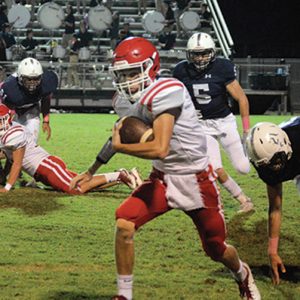