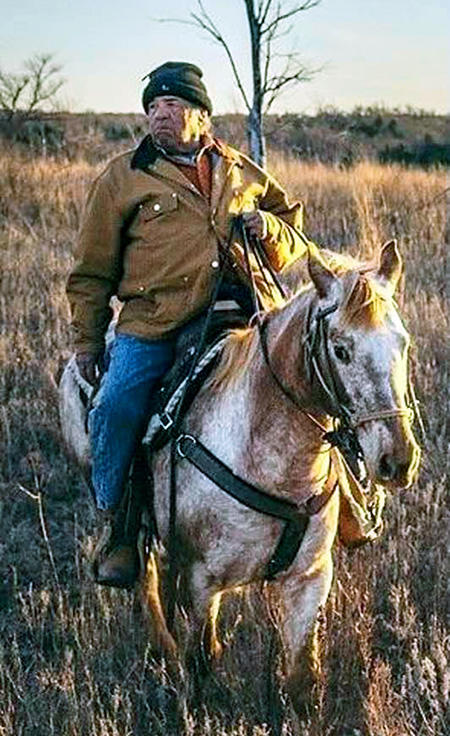 Pete B. Wolfe, a resident of Sulphur, was born July 1, 1941, in Willis, Okla., to Balem and Virgie Pauline (Looney) Wolfe. He passed away Saturday, Sept. 11, 2021, in Sulphur, Okla., at the age of 80 years, 2 months and 10 days.
He was married to Cheri E. (Bayens) Wolfe at Canon City, Colo., on Aug. 1, 1981. Pete grew up in Western Oklahoma. He attended school in Tipton, Okla. Pete worked in farming as a young man to help  the family. He was a stone mason when he came to Sulphur in 1968 to help in the construction of the Chickasaw Nature Center. After the construction Pete continued to make his home in Sulphur where he married Cheri, raised a son, Terry, and continued to live until his death. He was a well-known horse trainer and in his later years, Pete and Cheri owned Arbuckle Trail Rides and Wolfe Ranch, where they raised and trained quality horses that were sold worldwide.
Pete was a one-of-a-kind story teller and was a hard worker until the end. He was preceded in death by his parents, 2 brothers: Jody Wolfe and Don Wolfe; son: Kenny Wayne Wolfe, and grandchild: Cameron Wolfe.
Survived by his wife: Cheri Wolfe, of Sulphur; sons: Terry Allen Wolfe and Keith Wolfe; sisters: Mary Russell  and Charlotte Lafountain; brother: Steve Wolfe; 7 grandchildren: Kerry Wayne Wolfe, Rebecca Wolfe, Jo Lynn Raven Wolfe, Ember Nicole Wolfe, Pete Shelton Wolfe, Weston Beesley  and Lillian Beesley.
Pete was a very dear friend of Andi Culbertson and was a father figure and mentor to many including Karina Krebs, Johnathan Farmer and Adam Cooksey.
Graveside services will be held Thursday, Sept. 16, 2021, at 2 p.m. at Dolberg Cemetery. Interment will be in Dolberg Cemetery under the Direction of DeArman Funeral Home of Sulphur.
Online condolences may be sent to www.dearmanfuneralhome.com.