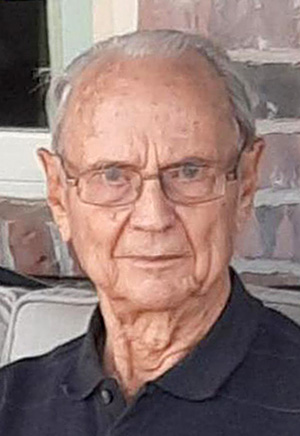 Funeral services for former Davis resident Doyle Wayne Chadwick, 90, were Friday, Oct. 1, at 10 a.m. at Whitt Funeral Home in Duncan. Pastor William Howe, his nephew, officiated. He was buried at Duncan Municipal Cemetery alongside his wife.
He was born June 21, 1931, at Park Springs, Texas, to Jewell Leona (Earp) and William Jewel “Jude” Chadwick and died Sept. 26, 2021, in Edmond, Okla.
His mother died when he was 9 months old, and he lived with his grandparents, Jim and Sarah Chadwick in Park Springs, until he was 10 years old. Doyle’s father married Opal Monroe June 27, 1934, and together they raised three children: Doyle, Gerald “Corky” and Beverly.
Doyle attended Duncan junior high and high school, where he was a stand-out football, basketball and baseball player. After graduating from Duncan High School in 1949, he signed a professional baseball contract to play with the Detroit Tigers. During the off season, he attended Cameron Junior College on a basketball scholarship. In the spring of 1951, the New York Yankees bought his contract and sent him to Joplin, Mo., to fill the spot vacated by Mickey Mantle, who was moving up to the major leagues. In 1954, he received All-American Player honors from the National Baseball Congress (one of only 16 players from the national tournament at Wichita, Kan.).
On Nov. 4, 1951, he married his high school sweetheart, Norma Dene Howe. He played minor league baseball right up to the birth of their first child in August 1952. In fact, at the time of Richard’s birth in Duncan, he was involved in a brawl on the baseball diamond at Canton, Ill.
Doyle left baseball for a career with Halliburton Services in Duncan – but he wasn’t quite done with the sport, yet. He continued to play in the National Semipro League for the Halliburton team, which went on to win the state championship in 1954 and 1955. In the late 1950s, he was a baseball coach for the American Legion team in Duncan, and a referee for basketball and football games.
Although it’s not exactly a “rags to riches” story, he began with a job on the shop floor and rose to the position of manager at the Halliburton plant in Arbroath, Scotland. After he retired in 1989, he and Norma moved to their new home at Twin Lakes near Davis, where Doyle enjoyed a short walk to his fishing hole.
Doyle and Norma were active in their churches in Duncan, Scotland and Davis. He was a deacon and treasurer in their church at Davis, and spent many hours counting offerings before heading home for lunch with Norma. Saturday evenings generally found him preparing for his Sunday School lesson.
His sense of humor and slow, easy smile endeared him to family, friends and co-workers.
He was a “crack” 42 domino player and took pleasure in teaching the younger generation how to play by “Park Springs’ rules,” a nod to his hometown and stepmother Opal. He enjoyed working crossword puzzles and usually had a jigsaw puzzle under way on his coffee table at the Touchmark retirement center.
Pallbearers were Richard Chadwick, David Hays, Terry Morris, Chad Jones, Thomas Hays and Brent McClain.
He is survived by three children: Richard Chadwick and wife, Sharon, of Lead, S.D.; Cheryl Morris and husband, Terry, of Duncan; and Karen Hays and husband, David, of Edmond; four grandchildren: Chad Jones and wife, Hillary; Briane McClain and husband, Brent; and Marti Cook and husband, Hunter; all of Edmond, and Thomas Hays and wife, Jordan, of Aurora, Colo.; five great-grandchildren, Yasmine Jones, Hayden Jones, Wyatt McClain, Holly Cook and Natalie Hays, and a sister, Beverly Andrews and her husband, John, of Lawton.
In addition to his wife and parents, he was preceded in death by his brother, Corky Chadwick, and a granddaughter, Alesha (Chadwick) Henley.
Memorial contributions can be made to the Baptist Builders fund or Baptist Disaster Relief fund. Checks should be made out to: Oklahoma Baptist, with Baptist Builders or Disaster Relief #14728 in the “memo” line, and mailed to Watersedge, Baptist Foundation of Oklahoma, 3800 N. May, Oklahoma City, OK 73112, or a charity of your choice.