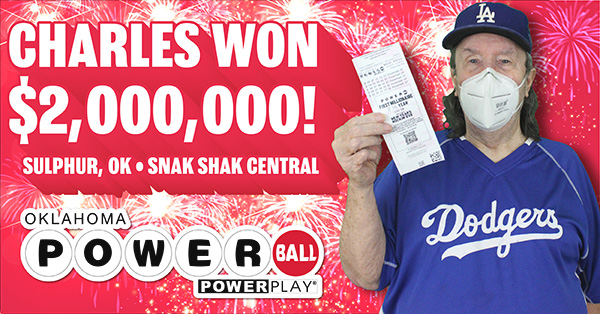 The search for the $2 million winner from Wednesday night’s Powerball® drawing ended Thursday at the Oklahoma Lottery Winner Center in downtown Oklahoma City. Charles from Sulphur claimed his prize after buying the winning ticket on Wednesday from the Snak Shak at 12th and Broadway in his hometown. He told officials at the Lottery that he picked his own numbers, just like he always does. It turned out to be a lucky decision for Charles, as he matched 5 out of 5 white balls and added Power Play®—a $1 investment that turned a $1 million Powerball prize into $2 million.
Powerball’s jackpot continues to climb. The next drawing will occur on Saturday and is now at $620,000,000, making it the 6th largest Powerball jackpot in game history.
Charles G. is the 72nd Oklahoma Lottery millionaire, including a Norman woman who won a $2 million Powerball prize on September 20th —also adding Power Play® to double her winnings.