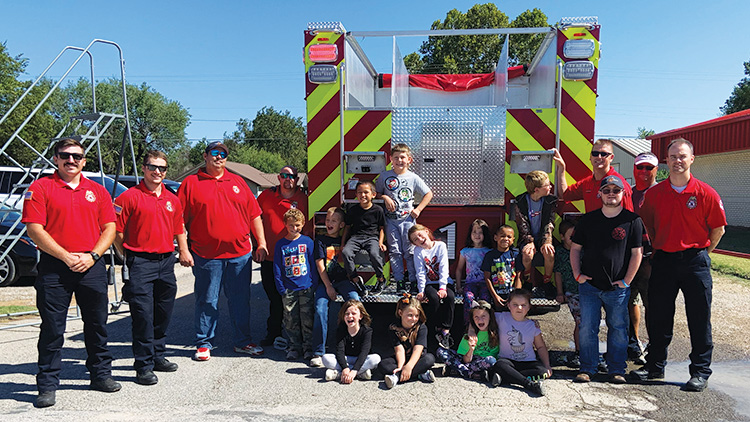 October is starting off with a bang for the Davis Fire Department. The Davis Fire Department has it’s first ever custom built Sutphen fire engine and they want you to see it at an Open House on Oct. 19. Along with this history making news, the Davis Fire Department has welcomed, Lance Chronister into their family. Chronister makes history as the first paid fireman in the history of the Davis Fire Department. Firemen also completed a swift water rescue course adding yet another essential life saving skill to their impressive resumes.
Fire Prevention Week
Davis Elementary School and Head Start students were the first to see the new engine on Monday when firemen visited the school teaching them fire safety during Fire Prevention Week. This year’s theme was Sounds of Fire Safety. Chief Dusty Parsons and Davis firemen were thrilled to be able to join elementary students in the school auditorium for a presentation and the popular race between teachers and firemen to see who can put on fire fighting gear the fastest. Photos of Fire Prevention Week will be printed in next week’s edition of The Davis News.
Open House
There will be an Open House and an an “Apparatus Push-in” on Oct. 19 at 7 p.m. Davis Fire Chief Parsons said this tradition dates back to the horse and buggy days when new equipment would be pushed in to the barn, fire department, etc. by those who would be operating the equipment. Chief Parsons said the new engine will be open for people to look at and climb in to see up close and personal. The engine should be fully equipped and ready for use by Oct. 19 if all of the equipment arrives on time.
The custom engine comes from the Sutphen company out of Dublin, Ohio. They are one of two family owned companies that builds fire engines in the United States. The new engine pumps out 15,000 gallons per minute making it the larges in the Davis Fire Department’s fleet.
Chief Parsons invites the public to come and celebrate this essential addition to the Fire Department’s fleet of emergency vehicles.
Swift Water Rescue Training
Davis firemen completed a Swift Water Rescue training class last month on Riversport OKC hosted by instructors from OSU Fire Safety.
The first class was rescue techniques taught in with boats in static (pond) water. This class was taught at night and included situations similar to a washing machine effect in the water that would purposely flip the boat.
“The moving water put us in predicaments where you might have to go all the way down the rapids teaching you to get out as quick as possible. There were a lot more hazards going down if you didn’t catch a rope bag,” Chief Parsons said.
Firemen trained with rope curtains where they started up stream, jump into the “hydraulic” and catch the rope curtain. The next training station was the “strainer.” Chief Parsons said you have to swim over the strainer, never under, because you could get trapped. During the class they received valuable training, they rescued adventurists at Riversports OKC who paid to go down the rapids. He said they made 3 or 4 real life rescues along with the staged rescues of their fellow classmates. “It is neat to get to rescue someone that you’re not training with,” Parsons said.
This class was dangerous and Chief Parsons said everybody was bruised and moving a little slower at the end of the class. Thankfully, their class didn’t have anyone with broken. Last year’s class did.
Chief Parsons said that firemen will put their swift water rescue techniques to work when the water warms up and they have all the equipment suggested to perform a swift water rescue like they were taught in class. Chief Parsons said the department will be looking into grants to purchase this equipment.