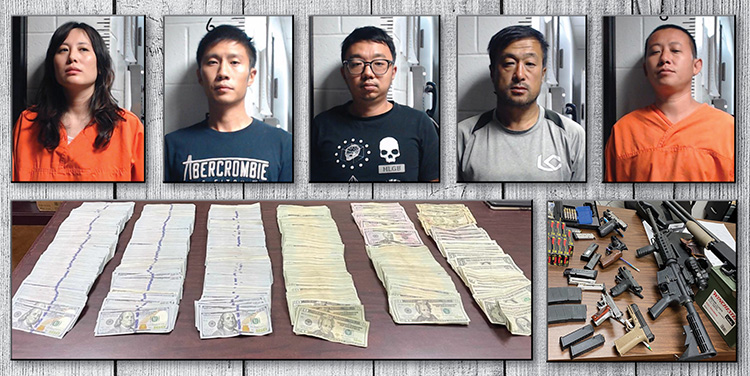 Cash, guns and Marijuana. . A complaint started an investigation that led to the arrest of five people and the seizure of approximately $230,000 in cash, numerous firearms, including an AR-15 and 12,000 marijuana plants. The marijuana plants alone could’ve let to millions during and were destroyed by Oklahoma Bureau of Narcotics agents. Suspects pictured above (from left) are: Yaquin Jing, Lihuah Jing, Bin Chen, Changhai Zhao and Lei Yang.

A complaint from a local citizen started an investigation into an area marijuana grow that led to the seizure of approximately $230,000 in cash, numerous firearms, including an AR-15 and 12,000 marijuana plants.
The investigation started when Deputy Ben Flowers received a complaint from a local resident after he attempted to introduce himself to his new neighbors. After being surrounded by his new neighbors, which some had firearms in the waistband of their pants, the citizen realized his new neighbors were not interested in making new friends.
Deputy Flowers contacted the Oklahoma Bureau of Narcotics for assistance in this investigation. The OBNDD assigned an agent who immediately began a joint investigation with the Murray County Sheriff’s Office. After a long investigation, a search warrant was obtained for the property which is located on Powell Road, just East of Sulphur. Inn the morning hours, the Murray County Sheriff’s Office and the OBNDD executed the search warrant on the property, on Oct. 5.
Lawmen secured 17 subjects who were residing on the property in a primitive type motel that had been constructed on the property and 3 R.V.’s. After the subjects were secured lawmen started their search of the property and soon realized this property contained numerous firearms. The search produced $230,000 in cash. Once lawmen reached the grow houses they estimated approximately 12,000 plants were being illegally produced and/or cultivated.
After interviews were conducted 5 subjects at the property were arrested. Bin Chen, Lei Yang, Lihuan Jing, and Yaquin Jing were arrested and charged with cultivation of marijuana, conspiracy, and possession of proceeds derived from illegal drug activity. Changhai Zhao was arrested and charged with cultivation of marijuana, conspiracy, possession of proceeds derived from illegal drug activity and possession of a firearm while committing felony. The 12,000 plants which could yield millions of dollars over their life cycle were destroyed at an off site location.
Some lawmen are under the opinion the Chinese government are funding these operations to get established in the United States.
Sheriff Darin Rogers would like to thank the agents of the Oklahoma Bureau of Narcotics, County Commissioner Colt Williams and Johnny Pettitt, and his deputies for their hard work in this incident.