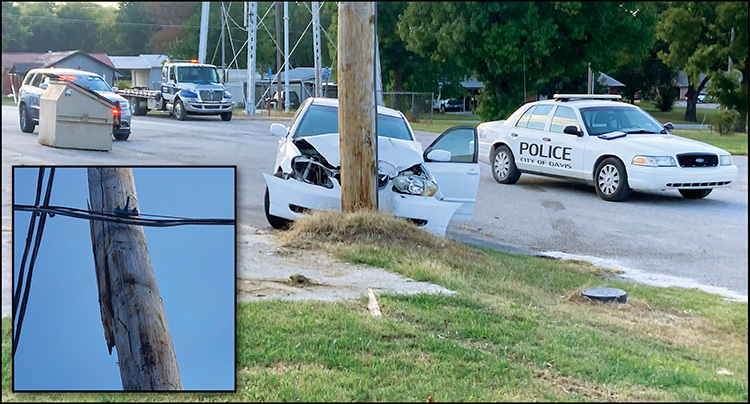 A crashing halt. A high-speed chase through Davis on Oct. 6 ended shortly after this car crashed into an electrical pole behind on Benton Ave. behind Sooner Foods. Shortly thereafter the driver was arrested. The force of the crash cracked the power pole, which has since been replaced.

By Alisha Thompson
In a scene that could be pulled straight from the show Cops, a reckless driver call turned into a pursuit through residential areas of Davis for two Davis officers. This story includes the suspect and an officer crashing, a foot chase and the suspect allegedly pulling a knife on law enforcement. It ended with her going to jail, but not before she faced a deputy wielding a pepper ball gun that eventually tackled her.
Davis Officer Isaiah Farris responded to a call around 4:45 p.m. on Oct. 6 regarding a reckless driver coming into Davis from Sulphur.
Brianna Harper was sitting in the drivers seat of a white Toyota Corolla in the EZ Mart parking lot when Officer Farris made contact with her. Officer Farris noted that Harper was acting strangely and he could smell marijuana coming from her car. He asked Harper if she had been smoking and she said yes. She told Officer Farris that there was marijuana in the door of her car and that she had a medical marijuana card at home.
Officer Farris said that for most of the conversation, the car was shut off. Then, Harper tried to start the car and Officer Farris attempted to stop her. She left EZ Mart and turned west onto East Main Street.
Officer Farris said that Harper turned south onto Seventh Street and continued making multiple left hand turns at speeds varying between 40 and 60 miles per hour. She continued west onto B Street and then to Main Street.
Davis Police Chief Dan Cooper joined the pursuit on South A and Hanna streets. Chief Cooper said he went west on Hanna, when Officer Farris and Harper turned north on South B. Harper would hit Chief Cooper’s patrol unit two more times before the pursuit ended.
She then turned into the Subway parking lot and continued east on Benton Avenue. Harper went from Benton Avenue onto South Second. Then to Main Street heading east. Officer Farris said at the intersection of Main Street and Third Street he saw Harper hit Chief Dan Cooper’s patrol unit, continue east onto turned left onto Fifth Street and then right onto Benton Avenue.
Officer Farris said Harper struck a utility pole behind Sooner Foods disabling her vehicle. She immediately exited the vehicle on foot, running in front of Sooner Foods, heading toward Sonic.
Officer Clifton Kirby was in pursuit of Harper on foot. Officer Farris said he cut Harper off in the Sonic parking lot with his vehicle. She then hopped a fence into a backyard of a residence on Benton Avenue and continued north. Sometime during this exchange she allegedly pulled a knife on law enforcement.
There, Harris found herself surrounded by several Murray County deputies and soon, detained. Harper is a Chickasaw native and the Chickasaw Nation Lighthorse Police Department took over the incident. Harper had to been seen at the hospital before going to jail since she was involved in an accident. Davis Police Officer Lonn Hayes, a cross-deputized officer for the Chickasaw Nation was assigned to follow the ambulance to the hospital and assist the ambulance crew if needed. Harper was released from the hospital and booked into jail.