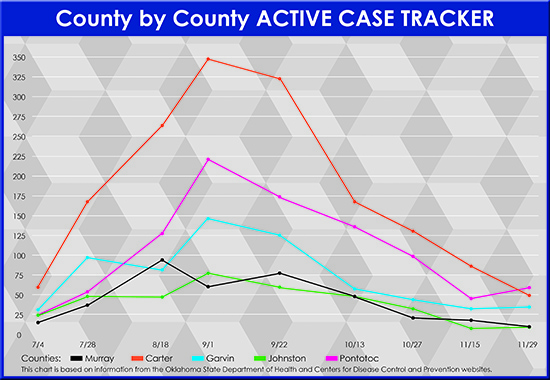 By Shane Bennett
The news of the Omicron variant, rising cases nationally and new COVID hot spots around the country may bring renewed worries with Christmas approaching. However, there is good news on the coronavirus front, locally. Case numbers continue to fall.
Since the spring of 2020, The Davis News has been tracking a five-county area around Davis, including Murray, Carter, Garvin, Pontotoc and Johnston Counties. In that area, the number of active cases is down to just 162 on Monday, according to the Centers for Disease Control and Prevention’s COVID Data Tracker webpage.
That number is down from 235 active cases on Nov. 23 and significantly lower than the fall peak of 852 on Sept. 1. For perspective, the highest total for this local area surpassed 2,000 active cases in late January. Then, case numbers fell off a cliff in February and continued falling to under 100 in May and June.
Case numbers rose through July and August, as seen in the graph above, until a second peak at the beginning of September. Those comparing numbers of Sept. 1, 2021, to Sept. 1, 2020, when our five county area had just 123 active cases, saw cause for alarm. In 2020, cases increased steadily from September through December before rising sharply in January.
If this year mirrored last year, but with a September starting number seven times greater, this winter could become critical. However, it has been just the opposite. Likely buoyed by vaccines and natural immunity from those previously infected, active case numbers in our area have steadily fallen throughout the fall of 2021.
Natural immunity and vaccine immunity are both factors that were almost non-existent in 2020, which is a big reason why this fall has been so different. Last year, the number of active cases rose to over 1,200 in our area before November was finished. As of Monday there were just 162.
In Davis, we now have just six active cases according to the Oklahoma State Department of Health website. That is down from 12 on Nov. 23 and a fall peak of 22 back on Oct. 20. The highest number ever for active cases in Davis was 71 around last Christmas, but we have had fewer than 30 consistently since the beginning of March.
The state of COVID is always fluid and no one knows where the numbers will go from here. As we turn from Thanksgiving into the Christmas season, though, the falling case numbers in our area are just one more blessing for which we can give thanks.