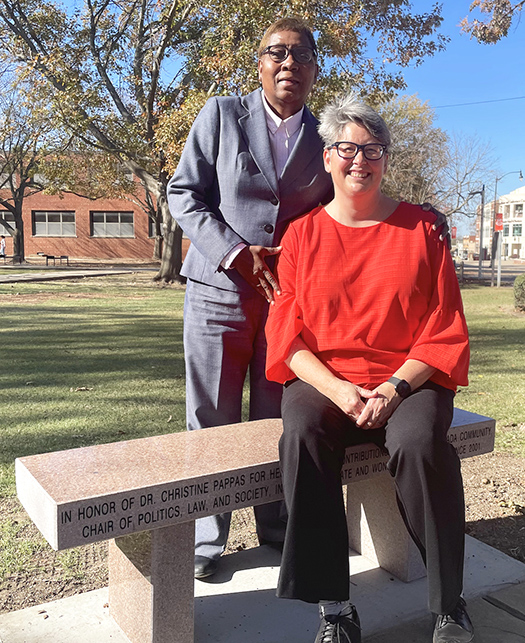 Dr. Christine Pappas, professor and chair of ECU’s Political Science and Legal Studies programs, sits on the bench recently installed on campus in her honor. She is pictured here with her wife, Dr. Shirley Mixon, who is a senior faculty member and director of ECU’s Interdisciplinary Studies program. (Photo Submitted by ECU)

Twenty years ago, East Central University invested in a young instructor who has since paid phenomenal dividends not only to the institution but to scores of students who have flourished under her guidance and leadership.
Dr. Christine Pappas was officially honored for her hard work and dedication to students on November 18 with a prestigious bench on the ECU campus. The bench is located next to the Tiger Fountain in front of Science Hall as part of a de facto “ring of honor” that recognizes those who made indelible impressions on the University, its students and its patrons.
“I became a part of the ECU family 20 years ago,” Pappas said. “I am humbled and honored beyond measure to have my own bench. This honor is even more touching because it came from my students.”
Pappas is now chair of ECU’s Political Science and Legal Studies programs in the Department of Law, Politics and Society. As professor, she teaches Political Science Research Methods, Tribal Politics, Constitutional Law, Women in Politics and more. Graduates of the Legal Studies program boast a 100% acceptance rate into law school, an almost unfathomable accomplishment.
The idea of honoring Pappas with a bench originated with Dr. Brandon Hill, vice president of Student Development. But it was her students who took the suggestion and ran with it.
“I thought it was a wonderful idea,” said Delanie Seals, a Legal Studies major who, along with other students, spearheaded the project with the help of the ECU Foundation.
“Dr. Pappas has provided so many opportunities not just for me, but for many students,” Seals said. “She has deeply impacted this community and continues to provide acceptance, mentorship, and an invaluable education to her students and advisees. The bench is only a small percentage of what Dr. Pappas deserves, but I’m glad we found a way to honor her.”