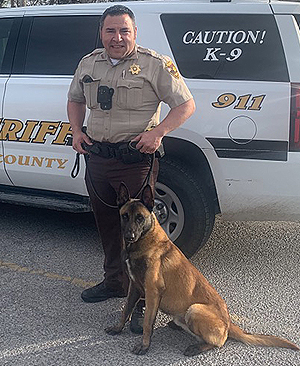 The Murray County Sheriff’s Office has new partner to help in the control of illegal narcotics in Murray County. Percero, a Belgian Malinois will be join K-9 handler Deputy Brandon Eddy. The Sheriff’s office added Percero to help fight the explosion of methamphetamine and other narcotics in the county.
“When the citizens of Oklahoma voted to reduce methamphetamine and other narcotics from felonies to misdemeanors law enforcement noticed a dramatic increase of methamphetamine. Most of the methamphetamine is coming from Mexico where the open boarder policy makes it much more easy to get the drug into the United States,” said Sheriff Darin Rogers. “Then you add in the new focus on rehab and the prisons releasing inmates sometimes after serving a third of their time and its apparent why the increase of drug activity.”
The Sheriff’s office is going to utilize the new K-9 in a proactive manner around the county. Sheriff Rogers believes focusing on methamphetamine and other narcotics will help reduce other crimes as well. Lawmen can connect methamphetamine to numerous crimes such as burglary, larceny, child neglect, domestic assaults and many other crimes. Also, numerous EOD’s (emergency on detention) can be connected with the use of methamphetamine which has an enormous cost to the tax payer. The Sheriff’s office will be very active with the new K-9 and numerous citizens will probably see Percero working in our community.
Deputy Charline Bates was dispatched to the Dolese Rock Plant West of Davis for larceny report. Deputy Bates learned a 16’ utility trailer was stolen along with a large spool of copper wire. Dolese employees estimated the total cost of the stolen items around $17,000 on Sept. 6, 2021.
The plant had surveillance and was able to capture a single cab truck enter the plant on Sept. 5 around 11:50 pm. and leave the plant with the stolen items about 15 minutes later. Sheriff Roger and Undersheriff Jay McClure asked Chickasaw Lighthorse Officer Terry Laxton for assistance in the incident.
The Chickasaw Nation provided surveillance video from local businesses near the plant. Sheriff Rogers and Undersheriff McClure secured the video and while observing the video from a nearby convenience store noticed a vehicle matching the description of the truck that entered Dolese rock plant.
The suspected truck parked and two male subjects entered the store and made a purchase. The time the suspects entered the store was minutes before the truck entered the rock plant. Witnesses identified one of the suspects as a former employee of Dolese rock plant. Lawmen identified the other suspect that was in the video surveillance.
On Oct. 1, 2021, Sheriff Roger and Undersheriff McClure traveled to Ratliff City to the residence of the other suspect, Kenneth Claxton. When lawmen arrived, they noticed the vehicle used in the crime and located the stolen trailer at the property. Claxton was not at home when law enforcement made their initial visit.
Lawmen noticed the outer jacket that covers copper wire at the residence during the initial visit, too. It appears this was a location where cooper wire had been stripped so it could be sold.
Undersheriff Jay McClure obtained a report from a metal company that buys scrap metal and both suspects had sold a large amount of cooper wire. After the investigation, a report was completed and presented to the District Attorney. After the District Attorney reviewed the report, an arrest warrant was issued for Claxton of Ratliff City. The Sheriff expects a warrant for the other suspect involved in the burglary in the near future. 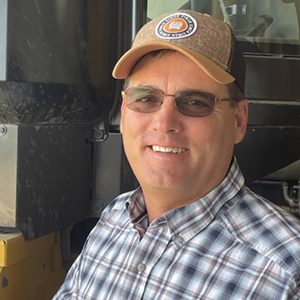