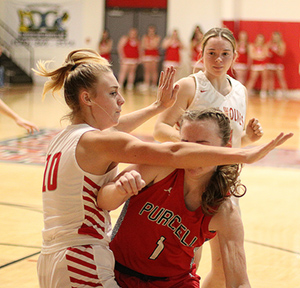 The Davis girls had an impressive week, splitting a pair of games against quality opponents, all without a key player. The Wolves also put together two good games, but couldn’t find enough offense to keep up in a pair of losses to Purcell and Bridge Creek.
Purcell 33, Davis 27
On Jan. 25, The Lady Wolves turned to a slew of underclassmen to help make up for the loss of junior Chloe Summers, a go-to player, on both ends of the floor. The Davis girls were ball-hawking in the first half, with active hands in Purcell’s passing lanes, frustrating the offense for the visitors.
Meanwhile, the Davis underclassmen were getting it done on the offensive end. Kamryn Martin stepped up on both ends of the floor and knocked down a three pointer midway through the first quarter. She and fellow freshman Kensley Barnes combined for 9 of Davis’ first 11 points as the home team built an 11-3 lead.
Logan Pruitt knocked down a jump-shot in the last minute of the first quarter to make it a 13-5 advantage for the Lady Wolves.
Unfortunately, they wouldn’t score again for the next 12:20 of game time. During that stretch, Purcell outscored the Lady Wolves, 16-0. Frustration boiled over Davis head coach Jeff Brown. He called a timeout shortly after Purcell was whistled for its first foul midway through the second quarter. He took the opportunity to remind the officials of the disparity in fouls in spite of full court man-to-man defense by the Lady Dragons. Brown did this with great volume, much to the delight of the home crowd, which gave him a standing ovation for his efforts.
If it was successful or not is hard to determine. When the game was over Purcell had shot 24 free throws to just two for the Lady Wolves.
Purcell’s largest lead was 21-13 midway through the third quarter. Pruitt worked the high post for a bucket to cut the lead to 23-19. Then Purcell connected on the second of two three-pointers it banked it off the backboard and pushed the lead back up to 30-21 with three minutes left in the game. Davis took its first free throw attempts with 2:29 remaining as Pruitt connected on one to make it 30-24. With 1:10 remaining Jacie LaNoy came through with a three-pointer to cut it to 30-27. Unfortunately for Davis, those would be the last points the team scored in a six-point loss.
Davis 44, Bridge Creek 24
A close game in the first half turned into blowout in the second half on Jan. 28, thanks to great team defense and an offensive explosion by Pruitt.
A trio of three-pointers by LaNoy and Ambria Caraway added to 14 points by Pruitt to take a 23-18 lead by intermission. In the second half, Davis switched things up defensively.
After struggled to rebound consistently in the first half, the Lady Wolves switched zones in the second half and held the Lady Bobcats to just 6 points. Davis stretched out its lead to 12 points by the start of the fourth and then shutout the home team over the final eight minutes to win the game going away.
“We had a lot of girls step up and play more with Chloe out and I really thought their effort was the different for us this week,” Brown said later. “Logan and Jacie did a great job leading the team, but we could’ve easily won both of those games and I think it was mainly because of how the other players stepped up”
Purcell 68, Davis 48
As has been the case throughout January, the Davis boys hung tight with Purcell throughout the first half of a home game on Jan. 25. The Wolves scored first on a three-pointer by Jake Parker before Purcell scored 11 of the next 13 to surge ahead, 11-5.
After a jumpshot by Spencer Clinton, Cody Caraway snagged a steal and fed Dakota Carter for a layup to make it a two-point game again.
A pair of free throws by Dalton Hefley to end the first quarter, followed by a Raydyn Amos bucket to start the second tied the game at 13.
Then the dragons went on a 12-0 run to distance themselves once again. The Wolves scored 8 of the last 11 points of the quarter to cut the lead to just seven at halftime.
The third quarter, though, started with Purcell scoring 15 of the first 16 points of the second half. That put the game out of reach for the Wolves.
Bridge Creek 55, Davis 40
On Jan. 28, the Wolves went to Bridge Creek and forced the Bobcats into a defensive struggle during the first half.
Bridge Creek managed just 16 points before the break, but unfortunately, Davis scored just 9. During that stretch, the Wolves missed 16 shots in the paint.
“Our guys are working hard and playing great defense and that’s keeping us in these games,” said Wolves head coach Bill Martin. “We just haven’t been able to make enough shots to win.”
In the third quarter, the Wolves had six different scorers in a 15-point frame. Bridge Creek countered with four three-pointers and six-for-six free throw shooting. That made for an 18-point quarter and pushed its lead to 34-24.
With Bridge Creek putting in another 18 points in the fourth quarter, Davis wasn’t able to mount the kind of comeback it needed to overtake them.
By the end of the week, the Lady Wolves were 10-7, while the Davis boys were 3-14. Both teams were set for a trip to Pauls Valley on Tuesday, followed by home games against Lindsay on Friday.
Girls Game Summaries
Team 1 2 3 4 – F
Davis 13 0 4 10 – 27
Purcell 5 11 7 10 – 33
D – Logan Pruitt 9, Kamryn Martin 7, Jacie LaNoy 7 and Kensley Barnes 4.
Team 1 2 3 4 – F
Davis 13 10 13 8 – 44
Bridge Creek9 9 6 0 – 24
D – Logan Pruitt 25, Jacie LaNoy 8, Ambria Caraway 5, Kensley Barnes 4 and Madison Adams 2.
Boys Game Summaries
Team 1 2 3 4 – F
Davis 11 10 7 18 – 46
Purcell 13 15 27 12 – 68
D – Raydyn Amos 15, Jake Parker 8, Spencer Clinton 7, Dalton Hefley 7, Dakota Carter 3, Jaxson Bonner 2, Cody Caraway 2 and Garrett Whitfield 2.
Team 1 2 3 4 – F
Davis 4 5 15 16 – 40
Bridge Creek9 7 18 21 – 55
D – Spencer Clinton 9, Jake Parker 8, Cody Caraway 7, Dalton Hefley 6, Dakota Carter 4, Tyson Moss 3 and Raydyn Amos 3.