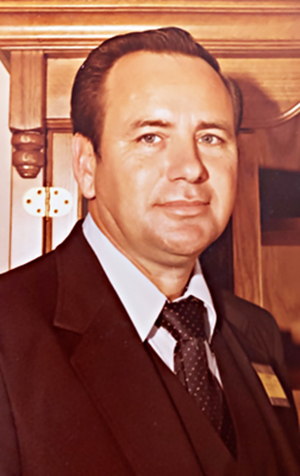 Johnny Gene Beckmon was born July 11,1941, in Tuskahoma/ Clayton area to the late Eugene and Velma Hamilton Beckmon. However, Johnny was raised by his late grandparents, Fred and Florence Hamilton. His grandparents always instilled in him the tracts of honesty, integrity and responsibility.
While a young man, Johnny met and started a long journey with the two most important persons in his life . . . . Jesus Christ and Sue Crittenden. Johnny and Sue were married on July 30, 1960. They didn’t have much more than love in the beginning, but they did what they had to do to start building a life that God would bless every step of the way.
In the ‘70’s, as young married persons, Johnny and Sue began attending and working in church. Johnny felt God was calling him to serve in the ministry. He kept it a secret from Sue because he wasn’t sure just how she would react. But God always prepares those who will be obedient to His calling. Sue reluctantly chose to stand by her husband, and they continue their successful and blessed journey down the road of a lifelong commitment to the Lord.
A family was also part of God’s plan for the Beckmons. First came a son, Johnny Devwayne. Their hearts were broken when they lost their second child, an infant son, Billy. Then came a daughter, Cindy. Johnny’s family was the center of his life. His love for them was evident by his esteem for his wife, and in the way he nurtured his children.
Johnny received his license to preach in January of 1977 and ministerial ordination in 1980. During his career as a pastor, he filled the pulpits of several Assemblies of God Churches in Oklahoma. Those included churches in Monroe, McAlister, Terral, Stringtown, Durant, Arpela and Yanish, Ending his pastorate duties in Davis in 2017. Many times, during his career, Johnny worked as a vehicle body shop technician to meet the needs of his family. He was considered to be superior in this field. During his years in the ministry, he was involved in building three new church buildings, one of which was the church in Davis.
In the 1970’s, he came through Davis, taking a group of young people to the Assembly of God church camp at Turner Falls. When passing the small frame Assembly of God Church in Davis, he felt strongly that God was speaking to him, telling him he would someday pastor that church. And in 1984, it came to be. The Beckmons started their pastorate in Davis. Johnny pastored the church at three separate times, totaling over 25 years of service.
In 2016, as retirement came, the Beckmons chose to finish their lives together in the town and church that was closest to their heart . . . . Davis. God does not take back His call to serve Him. After retirement, Johnny continued to be a regular attending member of Davis Assembly of God. He finished his earthly journey on Saturday, Feb. 5, 2022, in Sulphur when he claimed his residence with the Lord.
Those left to cherish his earthly memory include his loving wife Sue; son, Johnny Dewayne Beckmon and wife Sherry of Minco; daughter, Cindy Darlene Hawkins and husband Ron of Davis; six grandchildren, Michael Hector of Sulphur, Matthew Hector and girlfriend Bree of Sulphur, Erica Weldon and husband Benny of Pauls Valley, Riley Hawkins of Davis, and Trevor Johnson and Shandra West, both of Oklahoma City; and four great-grandchildren, Gamble, Destinie, Faith, and Iris.
Funeral services for Johnny will be held at 10 a.m., on Friday, Feb. 11, 2022, at the Assembly of God Church in Davis. Those officiating the service include the Reverends Billy Staggs, Frank Duncan, Larry Newton and Larry Harris. Interment will follow at Green Hill Cemetery in Davis.
Services are entrusted to Hale’s Funeral Home of Davis.
Online condolences may be offered at halesfuneralhomes.com.