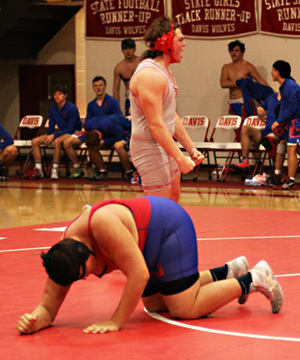 The Wolf wrestling team faced off against Durant on Feb. 1 in the final home dual of the season for Davis. A night filled with sentiment for seniors looked to have soured by the end of the 170-pound match as Davis trailed by 15 points and pretty much needed pins at each of the final four weights . . . . then the Wolves delivered just that.
Lane Rawls started the comeback at 182 with a pin that brought the hometown crowd to its feet. That victory was quickly followed by his brother, freshman Brenden Rawls, whose fall at 195 cut the Durant lead to just three points, 36-33.
Then came Shackelford. Senior, Cade Shackelford, in his first season wrestling as a Wolf in the Co-op between Davis and Mill Creek, had a section of family and friends in attendance to watch his final performance in Murray County . . . . and he didn’t disappoint.
Shackelford took the Durant 220-pounder down midway through the first period. Then, shortly thereafter, he put the Lion wrestler on his back. When the referee slapped the mat for the pin that put his team in the lead, Shackelford erupted in a raucous celebration. He turned, screaming, flexing and pointing to the Mill Creek faithful, while his teammates did the same over his shoulder.
It was an awesome moment, but the show wasn’t over yet. With the Wolves now leading, 39-36, Durant could still win the dual with a pin in the final bout.
For a moment, it looked like they might. Davis sophomore Mason Tomlinson threw the Durant heavyweight in a headlock, but the Lion wrestler rolled him through as either wrestler could’ve been on his back. Both wrestlers ended up on their knees on the mat in a scramble for the takedown.
Tomlinson won the race and scored the two, an put in a half nelson in the process. As he turned the Durant big man to his back, the Davis crowd rose to its feet. Then they let out a roar as Tomlinson registered the dual-clinching fall.
“The guys were buzzing for a while after the dual was over,” admitted head coach Gene Bennett. “We were down to the heavyweights against Sulphur and Plainview and lost them both. To win one and to it against a 5A team was great.
Tomlinson often gives up a lot of weight when going against bigger heavyweights, but makes up for it in athleticism and determination.
“That made it even more special because Mason is a team favorite,” Bennett said after the dual. “He wrestles hard and believes in himself. Before the match he fully expected to win.”
The dual started with Durant taking a 12-0 lead with a pin and forfeit. Then Davis rattled off three straight falls. Jett Jennings was one of three freshman with huge wins in the dual. He had an impressive first-period fall at 120, followed by a pin by Troy Bullman at 126. Ethan Crowe, the other Mill Creek senior added a fall at 132 to give the Wolves a 18-12 lead.
After three straight pins by Durant, freshman Luke Johnson came through a 9-6 decision at 160, filling in for his brother, senior Brendan Johnson, who was out due to injury.
That made it 30-21 before Durant got another fall at 170 to put Davis’ back against the wall. The comeback win finished off the dual slate for the team, which now looks ahead to Regionals. The Davis boys will once be at the 3A West Regional at Plainview on Feb. 18-19 in a field of 31 teams.
Jaylee Jennings will represent the Davis girls at the Noble Regional tournament. The girls Regional will include 61 team from all classes on Feb. 14-15.