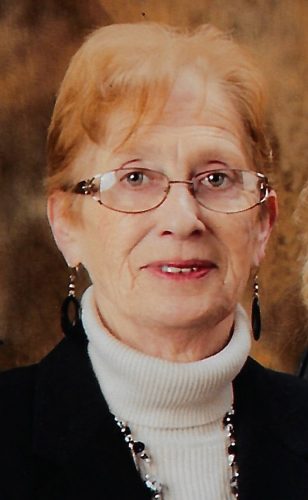 Hildegard Akers, better known as “Hilda,” was born May 14, 1941, in Germany to the late Ewald and Emma (Peck) Huster. She passed away on Sunday, April 3, 2022, in Davis, at the age of 80 years, 11 months, and 20 days, following a battle with cancer. She and Harrel “Biggon” Akers were united in marriage on July 14, 1959, in Baumholder, Germany. From this marriage were born three daughters, Kathy, Karen and Dian.
Hilda was a rather quite lady. She was a very strong-willed individual, who was never afraid of a hard day’s work. She spent several years working at the Akers In & Out in Dougherty, prior to working 20+ years as a cook for Sonny’s Country Kitchen in Dougherty and Sulphur, and later for the Main Street Restaurant in Davis. Hilda was known to be an excellent cook, no matter what kitchen she was in. Her chicken and dumplings, along with her buttermilk pies, were second to none.
Hilda was a very crafty individual, spending countless hours crocheting very intricate and beautiful pieces. She cherished spending time with her beloved family and especially enjoyed going shopping with her daughters. Hilda was a member of the Central Baptist Church, south of Sulphur, yet maintained strong ties with the Dougherty Baptist Church. She was always willing to assist with anything, either church needed, especially when it came to preparing meals for bereaved families.
Survivors include her husband Harrel Akers; three daughters, Kathy Perkins and husband Kent of Ratliff City, Karen Favors of Arlington, Va., and Dian Roetker and husband Rodney of Buffalo, Okla.; nine grandchildren, Jeffery Allen and wife Christy of Ratliff City, Bryan Perkins and wife Liz of Ratliff City, Courtney Wallace and husband Steven of Purcell, Dallas Favors and wife Julianne of McKinney, Texas, Dillon Favors of Frisco, Texas, Mikayla Favors of Lewisville, Texas, Chelsey Brown of Atlanta, GA., Tayler Chambers and husband Noah of Lindsay and Colten Roetker of Lindsay; ten great-grandchildren, Hayley and Lyla Allen, Bryson, Baylon and Remi Perkins, Kyden and Kensley Wallace, Patrick and Aspen Favors, and Wren Chambers; as well as several siblings including her sister, Crystal Truett of Nebo, N.C.
Funeral services will be held at 11 a.m., Wednesday, April 6, 2022, at the Dougherty Baptist Church with Pastors Willard McCartney Jr., and Eddie Dye officiating. Interment will follow at the Dougherty Cemetery.
Serving as pallbearers will be Jeffery Allen, Dallas Favors, Dillon Favors, Bryan Perkins, Steven Wallace and Noah Chambers.
Services are “Entrusted To” HALE’S Funeral Home of Davis, OK.
Online condolences can be offered at halesfuneralhomes.com.