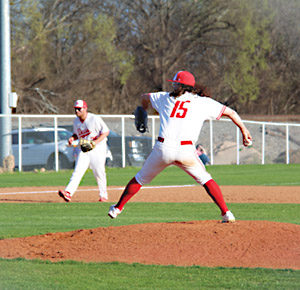 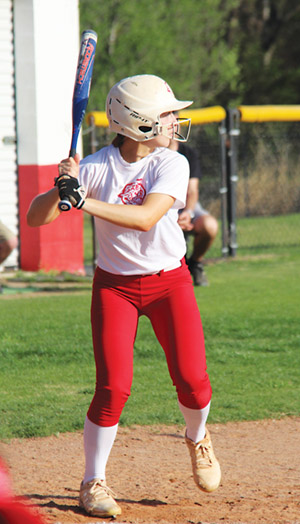 Despite the rain, Davis’ baseball and softball teams continued their busy play on the diamond. Both squads had to readjust their schedules but were able to play in tournaments by the end of the week.
The Wolves won a district doubleheader at home against Frederick and went 1-1 over the weekend at the Velma-Alma Tournament. The Lady Wolves had two games canceled and went 1-3 at the Washington Tournament.
Wolves 14, Frederick 0 (3 innings)
Davis scored six runs in the first and eight in the second April 5 in route to its second win of the season. The Wolves had six hits and nine walks. The Bombers helped Davis with three errors.
Raydyn Amos went 2-3 with one RBI and two runs scored. Jake Parker was 2-2 with four RBIs.
The six-run first came on four hits and three walks. Parker delivered a 2-run single and Amos belted an RBI double.
The Wolves’ eight runs in the second came on two hits and six walks. There were four straight walks to start the inning. Amos had an RBI single and Gavin Moore hit a 2-run double.
Moore started on the mound and allowed one hit while striking out two.
Wolves 10, Frederick 2 (5 innings)
In the second game, Davis erased a 1-0 Frederick lead and built a 5-1 cushion with four runs in the first and one in the second.
The Bombers trimmed the lead to 5-2 with a run in the third but Davis answered with a run in the fourth and four in the fifth.
The Wolves had nine hits and were led by Gavin Moore and Jeston Idleman who both were 2-2 with one run scored. First baseman Dawson Fetty was also 2-3.
Raydyn Amos made the start for Davis and allowed two runs on three hits. The senior walked four and struck out nine.
Wolves 10, Cyril 0 (4 innings)
Davis lost 4-0 to Marlow in the first round of the Velma-Alma Tournament but bounced back on April 9 with a run-rule win over Cyril. The Wolves took a 4-0 lead in the first inning on two hits, two walks and a passed ball. Lane Rawls hit a 3-run triple and Braden Rawls had an RBI single.
Davis added four runs in the fourth on three hits and a hit batter. Brenden Rawls delivered the big hit with a 2-run double.
The Wolves rounded out their scoring in the third with two runs. Davis had four hits in the inning, including Raydyn Amos’ RBI double.
Davis outhit the Pirates 9-3 and were led by Amos, Lane Rawls and Brenden Rawls who were a combined 6-6 with eight RBIs and seven runs scored.
Lady Wolves 11, Blanchard 1 (5 innings)
After having two games canceled early in the week, Davis opened the Washington Tournament April 7 with a win over Blanchard. It was the first of three games played on day 1 of the tournament.
Leading 2-1 after one, the Lady Wolves powered ahead with four runs in the second inning. Paige Miller’s triple scored two, Alexis Barnes doubled scoring one and Shelby Courtney’s single put Davis in front 6-1.
The Lady Wolves added a run in the third, two in the fourth and finished the game two in the fifth.
Davis outhit Blanchard 13-4. Barnes and Courtney led the Lady Wolves’ offensive attack with both going 3-4 at the plate and four runs scored.
Cache 17, Lady Wolves 12
Davis lost two games on day 1 to a pair of fourth-ranked teams. Silo, ranked fourth in Class 4A, defeated the Lady Wolves 15-0. Davis closed out the first day losing a shootout against Cache, ranked fourth in Class 5A.
Cache led 2-0 in the first inning. The Lady Wolves tied the score at 2-2 with one run in the first and one in the second. Shelby Courtney singled in the first scoring Paige Miller. Jacie LaNoy’s two-out single in the second scored Keyara Miller.
The Lady Bulldogs scored four runs in the third for a 6-2 lead. Cache launched back-to-back homeruns followed by three straight singles.
Alexis Davis homered in the third and the Lady Wolves trailed 6-3. However, Cache scored twice in the fourth and led 8-3 on two singles and a double.
Davis would not go away. The Lady Wolves hit six singles in the bottom of the fourth and with a walk scored five runs and the two teams were tied 8-8.
Cache tacked on three runs in the fifth with a homerun, two singles and a double.
The Lady Bulldogs finished off their scoring with six runs in the sixth. Cache homered, hit six singles and benefitted from two walks.
The Lady Wolves attempted a comeback in their half of the sixth, scoring four runs on four singles and a walk.
The two teams combined for 41 hits, including 14 from Davis. Barnes went 4-4 with an RBI and two runs scored. Courtney was 3-4 with five RBI while Miller went 3-4 and three RBI.
Davis played one game April 8 on day 2 of the tournament. The Lady Wolves lost 20-5 to Class 4A eighth-ranked Valliant.