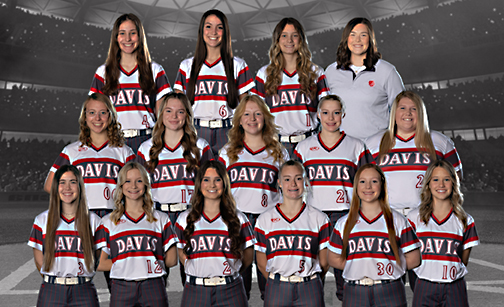 Davis’ baseball and softball teams maintained their busy schedules last week. Both squads played multiple games as they prepare for the end of regular season and post-season play nears.
The Wolves split their week, winning a pair of games at the start and losing twice by week’s end. The Lady Wolves faced three top-ranked opponents while going 3-3 in a five-day span.
Wolves 8, Velma-Alma 0 (4 innings)
The Wolves defeated Healdton 16-1 on April 11, then blanked Velma-Alma the next day in a home win. Davis posted 10 hits against the Comets while scoring three runs in the first, two in the second, two in the third and one in the fourth.
Starter Gavin Moore pitched a shutout on two hits and five strikeouts. The senior hit one batter and had one passed ball.
Junior Lane Rawls went 3-3 against the Comets. His double in the fourth was Davis’ only extra-base hit.
Kingston 4, Wolves 2 (9 innings)
Davis took the Redskins to extra innings April 14 before allowing the two winning runs in the top of the ninth.
The game remained scoreless until the fifth inning when Kinston took a 1-0 lead. The Wolves answered in their half of the fifth with a run on three hits and a walk.
Kingston regained the lead at 2-1 in the eighth on an RBI double. Davis again tied the score with a run in the eighth.
The Redskins scored the game-winning runs in the ninth on a two-out single.
Raydyn Amos started for the Wolves and worked two innings and allowed three hits.
Quaid Martin relieved Amos in the third and pitched the remainder of the game. The freshman surrendered all four runs on seven hits and three strikeouts.
CCS 15, Wolves 12 (8 innings)
In a game played April 16, Davis built an 8-0 home lead after four innings, only to see CCS tie the game in the seventh and win it in extra innings with seven runs in the eighth.
The Wolves took a 1-0 lead in the first on Cody Caraway’s solo homerun. Davis added two runs in the second on Lane Rawls’ two-run double.
The Wolves scored three in the third, two in the fourth and led 8-0. That is when CCS countered with its comeback.
The Royals scored a run in the fourth and trimmed the lead to 8-5 in the fifth with a grand slam.
CCS sent the game to extra innings in the seventh with three runs against Davis relievers Raydyn Amos and Luke Linville. Two walks in the inning set up a three-run homerun.
The Royals clinched the game in the eighth scoring seven runs on no hits. There were five walks, an error, a hit batter, a passed ball and wild pitch.
Davis responded with a comeback attempt in the bottom of the eighth. The Wolves scored four runs on four hits and two walks.
Davis had 10 hits against the Royals’ pitchers, but left bases loaded on four occasions. The Wolves also committed five errors.
Amos went 2-6 with a run scored and five RBI. Caraway was 2-5 with two RBIs and three runs scored.
Gavin Moore started on the mound and worked six innings. He allowed five runs on five hits, walked four and struck out 10.
Coalgate 6, Lady Wolves 1
Davis run-ruled Elmore City-Pernell 15-2 April 11 then traveled to Coalgate the next day to face the Lady Wildcats in a three-way with Caney.
Davis took a 1-0 lead against Coalgate in the second inning on Jacie LaNoy’s RBI single. The Lady Wildcats tied the score with a run in the fourth, then posted the win with four runs in the fifth and a run in the sixth.
Addison Danker went 3-3 with a run scored for Davis. Alexis Barnes and Kamryn Martin both went 2-3. Anna Merrell was 1-2 with the Lady Wolves’ only walk.
Lady Wolves 5, Caney 4 (8 innings)
Davis bounced back from their loss to Coalgate that same afternoon with an extra-inning win over Class A top-ranked Caney.
The Lady Wolves erased a 1-0 Caney lead with three runs in the third. Davis had five hits in the inning, including Anna Merrell’s RBI single.
Davis built a 4-1 lead in the fourth with a run on two hits. Caney tied the score at 4-4 in the sixth with three runs on a hit, two walks and an error.
Paige Miller hit one-out singles in the eighth. Miller scored the game-winning run on Kensley Barnes’ grounder to the shortstop.
Martin, Ryan and Merrell all went 2-3 against the Lady Cougars with two RBIs and three runs scored.
Lady Wolves 8, Mangum 3
Davis traveled to Washington April 14 to play in a three-way with Class 3A #1 Washington and Mangum. The Lady Wolves lost to Washington 10-2 but rebounded against Mangum with an 8-3 victory.
Mangum scored two runs in the top of the first on a pair of back-to-back doubles. Davis answered with four runs in the first on four hits and three walks.
Shelby Courtney delivered the big hit with her bases-loaded triple.
Mangum cut the lead in the fourth 7-3 with a homerun. The Lady Wolves responded with a run in their half of the fourth and led 8-3.
Miller went 3-3 with two runs scored. Kensley Barnes was 2-3 with three runs scored. Alexis Barnes was 2-3 with two runs scored and an RBI.
Davis lost at home to Class 5A top-ranked North Rock Creek 15-3 on April 15.