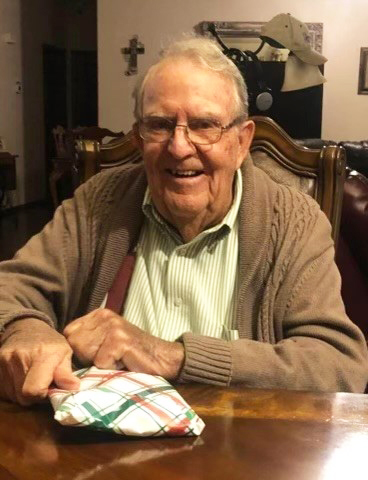 Funeral services for Edgar Eugene Lee will be held at 2 p.m., Wednesday, May 4, 2022, at the Pentecostal Holiness Church, in Davis, with Pastor Neal Barlow, Brother Frank Duncan and Dr. Terry Trammel officiating. Interment, with military honors, will follow at Green Hill Cemetery in Davis.
Edgar was born Aug. 16, 1932, in Maud to the late Everett B. and Millie Mae (Chandler) Lee. He passed away on Thursday, April 28, 2022, in Davis, at the age of 89 years, 8 months and 12 days. Edgar and the former Ms. Laura Maeruth Bright were united in marriage on July 10, 1952, in Hobart. From this union was born two children, Mike and Cheri.
Edgar grew up in the Paoli area. He graduated from Stratford High School, Class of 1950. Following high school, Edgar joined the United States Navy, serving from 1951 until he was honorably discharged in 1955. Upon completing his service to our country, Edgar returned to Oklahoma, where he attended Oklahoma City University, earning a degree in electronics in 1956. He and his family then moved to Edmonds, Wash., where he managed a television shop. In 1963, the family moved from Washington to Davis, where he began working for Duck’s Furniture. In 1978, Edgar ventured out on his own and started Lee’s TV of Davis, repairing televisions and installing antennas. After selling his business in 1994, Edgar spent the next 13 years, delivering medical supplies for Sooner Pharmacy.
In younger years, Edgar enjoyed being outdoors hunting, fishing and tending to his garden. For several years, he and Maeruth enjoyed the art of square dancing with area friends. Edgar had a talent for telling stories and loved sharing them with family and friends. His story telling led him to earn the title of “Uncle Fun.” Edgar will be remembered as a very kind-hearted, gentle souled man, with a friendly smile.
Survivors include his beloved wife, Maeruth; son, Mike Lee and wife Emily of Davis; Cheri Zdziarski of College Station, Texas; five grandchildren, Kelsey Lee, Marshal Lee and Mason Lee, all of Davis, Laura Horodyski and husband Bobby of Lehi, Utah, and Michael Mays of Moore; three sisters, Freeda Goodson of Oklahoma City, Marie Bradley of Duncan, and Irene Niemyer of Greenfield; and two brothers, Fred Lee of Washington, and Merlin Lee of Claremore.
In addition to his parents, Edgar was preceded in death by five brothers, Raymond, Wilford, Edward, Lloyd and Hugh Lee
Services are “Entrusted To” Hale’s Funeral Home of Davis.
Online condolences may be offered at halesfuneralhomes.com.