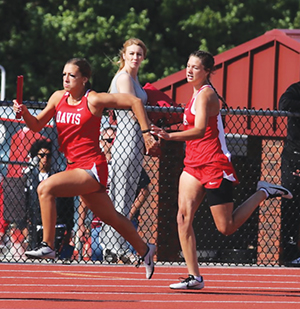 Davis’ track teams ran last week at the Velma-Alma Invitational and Class 3A Regional Meet at Plainview. Two of the Lady Wolves’ relay teams qualified at Regionals for the State Meet on May 6 and 7.
At the Velma-Alma meet on April 26, the Lady Wolves’ 4×400 relay team (Kensley Barnes, Chloe Summers, Jacie LaNoy and Cassidy Parsons) finished fourth.
No one on the boys’ team placed at the Velma-Alma meet.
The Lady Wolves are sending their 4×200 and 4×400 relay teams to State. Both teams finished fourth April 30 at Regionals.
The 4×200 team (Summers, Barnes, Parsons and Shelby Courtney) posted their fastest time of the year at 1.51.70. The 4×400 team (Barnes, Summers, LaNoy and Parsons) qualified with a time of 4.28.00.
Davis’ 4×100 team (LaNoy, Barnes, Summers and Courtney) placed fifth at 53.00 seconds but did not qualify for State.
Individually, Parsons finished sixth in the 400-meter dash but did not qualify.
For the Wolves at Regionals, Jake Hefley placed fourth in both the 400-meter dash and 800-meter run but did not qualify for State.
The Class 3A State Track Meet will be at Western Heights High School in Oklahoma City.