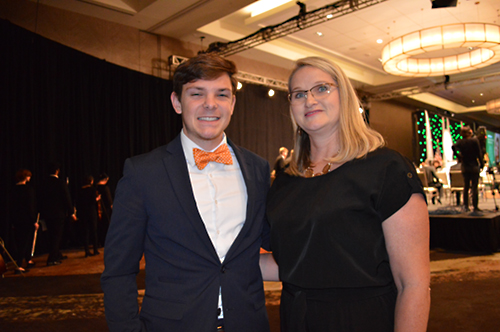 Davis High School algebra and geometry teacher Amanda Rogers (right) congratulates Kyler Baldwin, an Academic All-Stater, during the Oklahoma Foundation for Excellence Academic Awards Banquet, held recently in Oklahoma City. Baldwin, a 2022 graduate of Davis High School, was among 100 outstanding seniors from Oklahoma public schools who were honored by the foundation as Academic All-Staters. He received an Academic All-State scholarship sponsored by Cherokee Nation. Rogers was Baldwin’s honored teacher guest at the banquet. The Oklahoma Foundation for Excellence is a nonprofit organization that recognizes and encourages academic excellence in Oklahoma’s public schools.