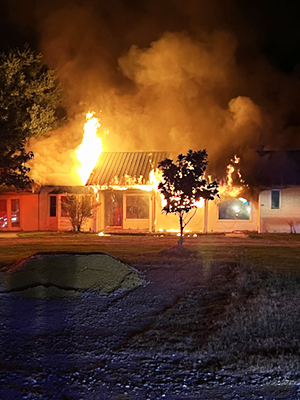 The Davis Fire Department responded to a structure fire on June 30 around midnight. The first fireman on scene reported that the house located at 1601 E. Main Street was fully engulfed with flames rolling out of the eaves. The Sulphur Fire Department sent six firemen to help put out the fire, making a total of 14 firemen on scene. The State Fire Marshall was called to investigate the fire due to the ignition point. Davis Fire Chief Dusty Parsons said he is waiting on the fire report to announce the cause of the fire. Total loss of the structure is estimated to be around $270,000. (Photo by Seth Kemper)