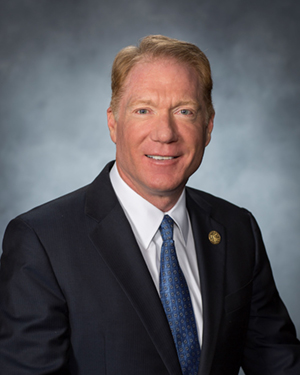 Chickasaw Nation Governor Bill Anoatubby today announced the appointment of longtime Secretary of Commerce Bill Lance as Secretary of State, and the appointment of former Congressman Dan Boren as Secretary of Commerce.  The appointments will become effective in June.
Lance is the longest-serving Secretary of Commerce in the history of the Chickasaw Nation. Since he was first appointed to that role in 2009 annual net income generated by the Nation’s businesses more than tripled, with a compounding annual growth rate of 11%.  Prior to his tenure as Commerce Secretary, Lance served as administrator of the Nation’s health system where, under the leadership of Governor Bill Anoatubby, he led development of the 370,000 square foot Chickasaw Nation Medical Center in Ada.
Boren, former United States Representative for Oklahoma’s 2nd Congressional District, served the past two and half years as a member of the executive team at First United Bank, a $13 billion financial institution operating in Oklahoma and Texas. Before joining First United Bank, Boren helped lead the Chickasaw Nation’s business diversification efforts as President of Corporate Development.  In that role, under the direction of Governor Anoatubby, Boren helped the Nation more than double its overall asset portfolio.  As Secretary of Commerce, Boren will oversee the development and execution of growth strategies for the Nation’s diverse business and investment portfolio.
“I am pleased to announce the appointment of Bill Lance as Secretary of State and Dan Boren as Secretary of Commerce,” said Governor Anoatubby. “Bill and Dan are distinguished professionals with strong character who are committed to the continued progress and growth of the Chickasaw Nation. Their significant contributions to furthering our mission over the years helped establish a firm foundation from which we can continue to build into the future.
“Dan’s strong business acumen and familiarity with the Nation’s economic development strategies acquired from working with Bill for seven years will be key to maintaining continuity and momentum in our economic development efforts.
“As Secretary of State, Bill will continue to represent the Nation on numerous business, civic, and government associations.  This will ensure our presence and participation in national, state, and local activities will remain robust. Additionally, Bill will continue to support our economic development endeavors by remaining active with several vital commercial tribal enterprises.”
Lance will continue to serve as the Chair of Global Gaming Solutions, a subsidiary of the Chickasaw Nation focused on entertainment, gaming, and racing enterprises.  He will also continue to represent the Nation on the executive committees of the American Gaming Association and Greater Oklahoma City Chamber.
“I am looking forward to serving and supporting the Nation as Secretary of State,” Lance said. “Governor Anoatubby is a remarkable leader with a clear vision, which has led to exponential growth in businesses and expansion of programs and services for our citizens. I greatly appreciated his support at the Commerce Department, and I look forward to continuing to work with both he and Dan to further the important mission of the Chickasaw Nation.”
Boren said, “Bill Lance is a great friend and mentor, and his support during my seven years working with him at the Nation’s Commerce Department prepared me for greater executive responsibilities and leadership opportunities.”
“I am pleased Bill will remain involved where I can continue to benefit from his experience and knowledge in my new role.  Moving forward, I am excited about the unique opportunity to lead the Chickasaw Nation’s dynamic Department of Commerce and work with Governor Anoatubby to grow our commercial enterprises and investments for the benefit and advancement of the Nation.”
Boren continued, “First United Bank presented me with a tremendous opportunity to grow as an executive, I will always appreciate Greg Massey and my colleagues at the bank for their support as we fostered remarkable growth and expansion.”
Greg Massey, Chief Executive Officer of First United Bank, expressed his support for Boren in his new role.
“We appreciate the remarkable contribution Dan has made to the growth of our bank since he joined our team,” “He is ethically grounded and helped us build a service culture for our employees, customers, and shareholders.   His strong financial background makes him ideally suited to serve as Secretary of Commerce and lead the Nation’s diversified business enterprises.”