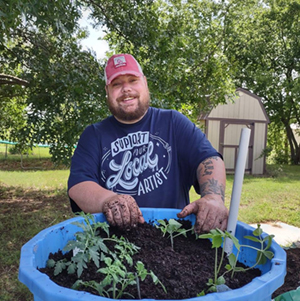 • Jerry John Bumpass, “Bump” to most, was born Aug. 9, 1978, to Jerry and Ellouise Bumpass in Ardmore, Okla. He passed away unexpectedly on Aug. 3, 2022, at the age of 43 years, 11 months and 24 days.
Jerry had one sister, Angela. They had the typical little brother/big sister relationship. But, the love and connection they had was deep as it grew through the years.
He attended Sulphur Public Schools from kindergarten through high school. Jerry John joined Boy Scouts and followed that path until he became an Eagle Scout. He loved earning badges and gaining, not only skills for life, but friendships. Whatever he put his mind to he accomplished.
He was very active in church, Faith Center, while in high school. He fell in love with God and the desire to share that love with others was fulfilled by joining the Power Team for a short while. He got to  travel the world and share the Lord with others. This lead to Jerry attending  Applied Life Christian College in Hot Springs, Ark. There he felt drawn to be a teacher and met his wife, Tiffany. They married in 2000 and had 3 amazing daughters, Alyssa, Zoe and Katelynn.
Jerry and his family moved back to Oklahoma to be near his parents, Jerry and Ellouise in 2003. He loved his family very much. His mom passed away due to an illness in 2005. Jerry stepped up to be by his dad and sister’s side.
Over the years he worked at Disco Automotive Hardware, Stinson Materials, Walmart, the Murray County Jail, Murray County Sheriff’s Department, the Sulphur Police Department, Forum and East Jordan Iron Works. Wherever Bump worked his smile and giving heart was felt. He became a trusted friend immediately. His desire was for everyone to feel the love he had in his heart for others. This characteristic is found in few. Those people are in our hearts forever.
His greatest goal and accomplishment is his girls. He wanted them to know he was there for them. Being a present dad was known not only to them but, to everyone who knew Bump. He loved being in the stands cheering them on no matter if it was the barn for FFA, bleachers for Band, Color Guard, basketball, soccer or softball. His pride and joy was spending time with them.  His passions of OU football or OU sports in general, fishing, camping, cooking and art were passed on to his girls. Being with friends and family was his favorite pastime.
Jerry was preceded in death by his mother, Ellouise Bumpass; sister, Angela Bumpass; and grandparents.
He is survived by his father, Jerry and his wife, Sally; and daughters Alyssa, Zoe and Katelynn.
Memorial Service was Tuesday, Aug. 9, 2022, at 10 a.m. at the Central Church of the Believers in Sulphur with Craig Lemley officiating.
Services under the direction DeArman Funeral Home in Sulphur. Online condolences may be sent to www.dearmanfuneralhome.com