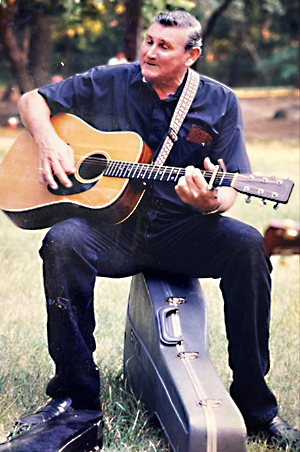 •Alfred Ray Brooks, better known as Ray, was born Nov. 1, 1939, in Dougherty, Okla., to the late Alfred Namon and Effie Bernice (Haney) Brooks. He died Thursday, Aug. 25, 2022, in Ada, at the age of 82. Ray and the former Ms. Gloria Marie Pope were married on June 12, 1961, in Davis, by Brother Jim House. From this union were born four children, Wilma, Dolores, Barbara and Bobby.
Ray grew up in Dougherty, where he resided most of his life. He spent his life working as a General Mechanical Technician, employed with multiple companies including Hudiburg Chevrolet in Oklahoma City and Wayne Edison Chevrolet. Ray also had several certifications in Diesel Mechanics. Later, he worked for Murray County Commissioner District 1 until he retired. Although he officially retired, Ray continued to do auto repairs at his own home shop.
Ray was a very hardworking man with a kind soul and a good heart. He did whatever it took to provide for his family, which often meant long hours and tough work. Despite the long hours of hard work in his shop, Ray never failed to be the best father he could. He loved and cherished his family.
Ray had a passion for music. He was an accomplished guitarist and enjoyed and singing bluegrass music. He performed at numerous places including Turner Falls Park for some 10 years, and the American Legion for many years. He was a member of two Bluegrass bands, The Bluegrass Wood Cutters and Buckhorn Bluegrass. He loved playing music for his family and friends along the way.
Survivors include his wife, Gloria; two daughters, Dolores Billy and Barbara Park; one son, Bobby Brooks, all of Dougherty; seven grandchildren; twenty-four great-grandchildren; five great-great grandchildren; one sister, Margaret Beaver; one brother, Carl Lee Brooks; as well as a host of nieces, nephews and cousins.
In addition to his parents, Ray was preceded in death by one daughter, Wilma Brooks Nichols; one great-grandson, Joseph Dean Luker; and two sisters, Dorothy Brooks and Roberta Davis.
Funeral services were held 2 p.m., Tuesday, Aug. 30, 2022, at the Dougherty Baptist Church, with Pastor Willard McCartney Jr. officiating. Interment followed at the Dougherty Cemetery.
Services were “Entrusted To” HALE’S Funeral Home of Davis, OK.
On-line condolences may be offered at halesfuneralhomes.com.