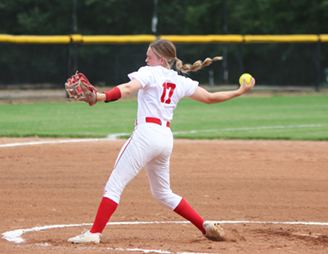 The Davis softball team returned to the win-column this past week going 3-3. The Lady Wolves led off with a doubleheader sweep at CCS and posted a win over Ada in the Roff Tournament.
Davis also lost a district game at home to Kingston at the start of the week and were defeated by Roff and Bethel over the weekend.
Davis 14, CCS 1
The Lady Wolves scored four runs in the first, two in the second and eight in the third to record the run-rule district win Aug. 22. CCS scored its only run in the first inning.
Davis sent nine batters to the plate in the first for its four runs. Paige Miller and Kensley Barnes both hit doubles in the inning. Preslee Hunt, Kamryn Martin and Gracie Fullerton all hit singles in the third. Alexis Barnes and Kensley Barnes each belted doubles.
Kensley Barnes went 3-3 with a run scored and an RBI. Miller was 1-3 with two runs scored while Martin was 1-3 with two RBIs. Alexis Barnes was 1-1 with three runs scored and two RBIs. Jakobi LaNoy went 1-1 with a run scored and an RBI. Fullerton was 1-1 with two RBIs and Hunt went 1-1.
Charlee Donaho started at pitcher and no-hit the Lady Royals. The senior faced just 10 batters and struck out three.
Davis 13, Ccs 0
The Lady Wolves scored eight runs in the first and five in the second to ensure the district sweep.
Miller, Shelby Courtney and Hunt highlighted the first with each belting a triple. Courtney’s blast scored two runs and Hunt’s came with bases loaded.
Kensley Barnes, Addison Danker and Stella Baker all hit a single in the second. Miller also hit a bases-loaded triple that same inning. Miller went 2-2 with four RBIs and a run scored, while Alexis Barnes was 1-2 with a run scored and an RBI. Courtney hit 1-2 with two RBIS and a run scored.
Kensley Barnes was 1-1 with a run scored. Danker went 1-1 with two RBIs, Baker hit 1-1 with a run scored and Hunt was 1-1 with a run scored and three RBIs. Danker started on the mound and walked one and struck out six.
Kingston 6, Davis 4
The Lady Wolves returned home Aug. 23 and lost a district game to Kingston. Davis held a 3-2 lead going into the seventh, only to see the Lady Redskins rally for four runs in the top of the inning.
Kingston took a 2-0 lead in the first inning. The score remained until the fifth when Davis tied the game 2-2.
Shelby Moring led off hit by a pitch and scored with one out on Miller’s RBI-double. Alexis Barnes doubled scoring Miller. Davis took the lead at 3-2 with a run in the sixth. Kensley Barnes led off with a single and reached third on an error and stolen base. Courtney scored Kensley Barnes on a sacrifice fly.
Kingston singled with one out in the seventh. The Lady Redskins grabbed the lead at 4-3 on back-to-back Davis errors. The next Kingston batter hit a two-run homerun. Trailing 6-3, Davis scored a run in the seventh. Miller led off with a double and stole third. She scored on Alexis Barnes’ sacrifice fly.
Pitcher Addison Danker made the start and allowed six runs on seven hits. She walked four and struck out six.
Roff 3, Davis 2
The Lady Wolves lost to the host Lady Tigers Aug. 25 in the first round of the Roff Tournament. Davis scored two runs on one hit. Roff scored two runs in the first on two singles and a Davis error.
The Lady Wolves cut the lead to 2-1 with a run in the third. Preslee Hunt earned a one-out walk and scored on an error.
Roff scored a run in the sixth and led 3-1 on a walk and two singles. The Lady Wolves trimmed the lead to 3-2 with a run in the sixth. Alexis Barnes reached second on an error, followed by a walk to Kamryn Martin. Barnes scored on Mattie Morton’s sacrifice fly.
Danker pitched for the Lady Wolves and allowed three runs on four hits. She recorded five strikeouts and three walks.
Davis 8, Ada 1
Davis built a 5-0 lead and cruised to a seven-run win over Class 4-A Ada. The Lady Wolves scored two runs in the first, one in the second and two in the third.
Ada scored a run in the fourth. Davis closed out the scoring with three runs in the fifth. Paige Miller and Alexis Barnes each went 3-4 with two runs scored and both hit doubles.
Miller posted two RBIS, while Alexis Barnes belted an RBI-triple in the fourth and recorded three RBIs.
Donaho went 2-3 with an RBI and Kamryn Martin was 1-2. Donaho pitched and allowed one run on five hits and struck out one.
Bethel 4, Davis 3 (5)
The Lady Wolves again took a lead into the final inning, only to see Bethel rally for the come-from-behind win.
Davis took a 1-0 lead with a run in the first. Miller led off with a bunt-single, stole second and moved to third on Kamryn Martin’s single. Miller scored on Mattie Morton’s bunt-attempt.
Bethel tied the game at 1-1 with a run in the first. The Lady Wolves regained the momentum with two runs in the second. Danker doubled, followed by Hunt’s single. A Bethel error scored Danker and moved Hunt to third. Hunt scored on Courtney’s sacrifice fly and the Lady Wolves led 3-1.
Bethel again responded with a run in the second. A lead-off walk later turned into a two-out run on an RBI-single. Bethel snagged the win in the fifth scoring two game-winning runs. A Davis error and single set up a two-out, two-run double.
Davis is now 4-3 in District 3A-2 and 6-11 overall. The Lady Wolves played at Comanche Aug. 29 in another district game and will host Lone Grove Sept. 1 at 5 p.m.