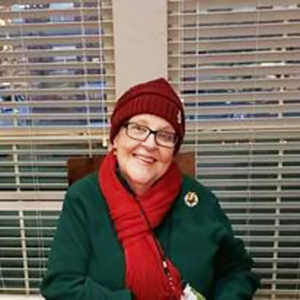 •Kay Lynn Clemons Knolles was born March 3, 1951, in Wynnewood, Okla., and passed away on Sept. 2, 2022, in Norman. She was born to Bonnie Vernette Williams Clemons and Aaron Clemons joining her brothers, James Lee and Rodger Dale. The family moved to North Carolina for several years and moved to Davis in 1960. In Davis, Kay was able to grow up with her many Williams and Clemons cousins, aunts and uncles.
Kay attended the Davis School system where she graduated in 1969. Kay developed an interest in becoming a vocalist in high school and went on to Oklahoma Baptist Oklahoma (OBU) to obtain a bachelor’s in voice. At OBU, she met her vocal teacher, Dr. Don Clark, who became a father figure to her and remained a lifelong friend. Upon graduation, Kay attended a year at the University of Oklahoma to obtain a master’s degree but decided to join the United States Army in the fall of 1975. Kay went to basic training in January 1976.
In the spring1976, Kay was stationed at Fort Huachuca, Ariz., where she met Ronald Allen Knolles. The two married in Davis on April 2, 1977, and became a proud step-mother to Douglas Ronald and Dirk Michael Knolles. In September 1978, Kay and Ron announced the birth of their daughter, Erin Kathryn. Kay was honorably discharged from the Army in September 1978 at the rank of Specialist 5. Kay and Ron moved with their children, Dirk and Erin, to Mahwah, N.J. in late 1978. In May 1980, Kay and Ron announced the birth of their son, Benjamin Daniel. Shortly thereafter the family moved to Renton, Wash. In 1984, Kay, Ron, Erin and Ben moved to San Antonio, Texas, until Ron’s retirement in 1987 and then moved to Davis.
Kay went back to school attending East Central University and majoring in social work. In 1988, Kay began working for the Department of Human Services as a case manager for the Development Disabilities Services Division. She worked with the state for 27 years as a case manager, state auditor and finally the Region 2 Area Supervisor. She retired in 2015.
Kay was an accomplished vocalist and was a member of Bisonettes while at OBU and Reminisce with Denise White, Eva Strickland Phipps, Pam Henley, Joanne Hefley and Vicki Broaddrick for 14 years. Kay was an avid crafter and enjoyed making paper pulp figurines. If you followed her Facebook account, you know she was a highly competitive and formidable player of canasta and scrabble. Kay also loved and doted on her little apple head, Rudy.
Kay was a lifelong Christian with a strong faith and belief in God’s acceptance of all people. She not only sang in multiple church choirs throughout her life, but also taught Sunday school, Bible school and Girls in Action (GA).
Kay had a special way with people and was a surrogate mother to many and treasured friend to all.
Kay was preceded in death by her mother, Bonnie Clemons; father, Aaron Clemons; her beloved cousin, Kaye Lynn Speerbrecher; and many of her beloved aunts and uncles.
Kay is survived by her husband, Ron Knolles; her children and daughters-in-law, Douglas and Christy Knolles of Chandler, Ariz., Dirk and Sherry Knolles of Benson, Ariz., Erin Knolles of Norman, and Ben and Kellie Knolles of Norman; her grandchildren, Austin, Carly, and Shelby Knolles; her brothers and sisters-in-law, Jim and Judy Clemons of Lone Grove, and Rodger and Jenny Clemons of Norman; her Aunt Lora Belle Williams of Davis; and many other treasured in-laws, out-laws, nieces, nephews and cousins throughout the states of Oklahoma and Pennsylvania.
A viewing and visitation with the Knolles family will be held on Wednesday, Sept. 7, from 5-7 p.m. at Hale’s Funeral Home in Davis. The family is planning a celebration of Kay’s life to be held at a later date this fall.
In lieu of flowers, the family respectfully asks that donations be made to St. Jude Children’s Research Hospital in memory of Kay.
Services are entrusted to Hale’s Funeral Home of Davis.
Online condolences may be offered at halesfuneralhomes.com.