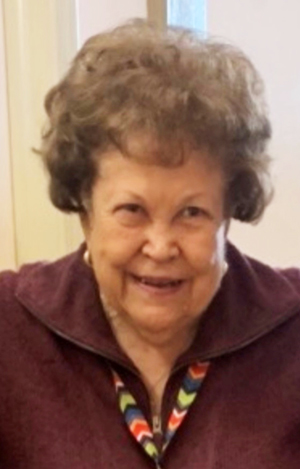 •Funeral services for Mary Dove Watson will be held at 1 p.m., on Wednesday, Sept. 7, 2022, at the First Christian Church in Sulphur, with Reverend Eddie Dye officiating. Interment will follow at the Clabber Flatts Cemetery, west of Stratford.
Mary was born Sept. 24, 1934, in Oklahoma City to the late Ed and Mary (Mann) Scott. She died Friday, Sept. 2, 2022, in Pauls Valley, at the age of 87 years. She and Riley Jack Watson were united in marriage on April 9, 1955, in Davis.
Mary was born second to the youngest of five children. She moved to Ardmore and attended Elementary School. Her family then moved to Davis where she graduated in 1955. She married Jack after meeting him in a adepartment store, where she worked. They lived in Madill, Davis and resided in Sulphur.
Mary worked at Sequoia Carpet Mill, where they made carpet and later worked for Lone Star Gas, which later was acquired by Oklahoma Natural Gas Company and retired there after 24 ½ years. Mary loved to dance and play dominoes with Jack and friends. She was an avid reader and was often seen carrying stacks of books from the local library.
Mary loved her family and her grandchildren. She always looked forward to spending time with them. She later resided at The Willows Assisted Living in Pauls Valley, where she loved to play bingo and enjoyed the company of the other residents. She was known for her warm smile and giggles and her fear of birds. She always remembered to send birthday cards, even if it was two weeks early.
Survivors include her daughter, Sherri (Watson) Miller and husband Mike of Norman; son, Alan Watson and wife Mary of Sulphur; granddaughter, Cassie (Miller) Todd and husband Casey of Norman, granddaughter, Shelby Miller and fiancé Trae Young of Atlanta, granddaughter, Tori Watson of Ada, and grandson, Zac Watson of Ada; and great-grandchildren, Tinsley Todd and Tydus Young.
In addition to her parents, Mary was preceded in death by her husband, Jack Watson; son, Terry Lynn Watson; one infant daughter, Gayla Jean Watson; granddaughter, Misty Dawn Watson; as well as four siblings, Pauline Scott, Edd Scott, Lorraine Dye, and Billie Pickens.
Services are entrusted to Hale’s Funeral Home, of Sulphur.
Online condolences may be offered at halesfuneralhomes.com.