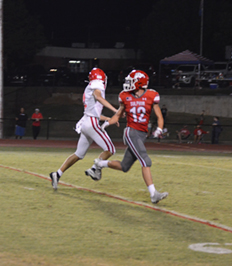 LOOKING FOR THE TOUCHDOWN. Sophomore Trey Melton worked the field at Friday’s game against the Sulphur Bulldogs looking to add points to the board for the Wolves. Melton’s 77 yard touchdown was the only one for the night in a tough 21-6 Murray County Bedlam loss.