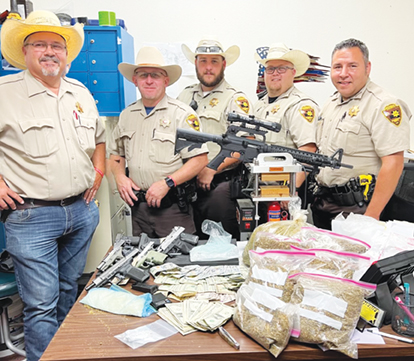 LARGEST FENTANYL bust to-date for the Murray County Sheriff’s Department. A Sulphur man sits behind bars on a $2 million bond after a traffic stop landed him in jail with multiple charges. MCSO deputies seized approximately 2,400 Fentanyl pills on the stop. The Oklahoma Bureau of Narcotics office said this the possibly the largest seizure of Fentanyl pills in Murray County.

On Oct. 11, 2022, a four-day long investigation into a local Fentanyl trafficking came to a close for the Murray County Sheriff’s Department (MCSO.)
William Parker Gray, 33, of Sulphur, was stopped for a traffic violation north of Sulphur, where deputies located approximately 2,400 Fentanyl pills combined with approximately 12 ounces of crystal methamphetamine and four firearms.
Gray had over $4,000 in cash in his possession. He cannot possess any firearms.
A search warrant was obtained for Gray’s residence located on Denny Road in Sulphur. During a search of the property, Murray County Deputies and agents of the Oklahoma Bureau of Narcotics located four additional fire arms (one stolen), a stolen 2022 Kawasaki Ninja, seven pounds of marijuana and approximately 7 grams of methamphetamine.
Gray was issued a bond of two million dollars and is being held in the Murray County Jail.
This Fentanyl seizure is the largest Murray County has seen. This illegally manufactured substance is fatal. Locally, lawmen have responded to an increasing number of overdoses. “We hope this slows the supply chain to this great county,” said Murray County Sheriff’s Deputy Ben Flowers.
Sheriff Darin Rogers wants to thank the Oklahoma Bureau of Narcotics and the National Park Service for their assistance. 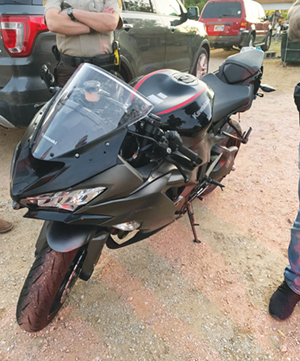 A TRAFFIC STOP led to a warrant to search a Sulphur man’s property for the Murray County Sheriff’s Office. Deputies recovered this 2022 Kawasaki Ninja, four firearms, seven pounds of marijuana and approximately 7 grams of methamphetamine. 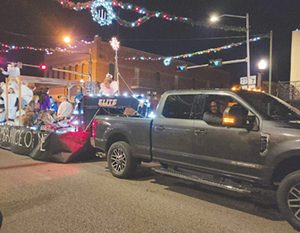