The Davis wrestling  teams competed this past week in their respective Western Conference Tournaments. Sandwiched between was a team dual loss at Murray County rival Sulphur.

Cayden Buckaloo represented Davis Jan.9 as its lone high school female wrestler at the conference tournament in Cache.
Buckaloo went 2-1 in a round-robin at the tournament and finished second in her division. The sophomore lost her first match of the day (and of the season) to a wrestler from Tonkawa.
“In her defense, she’s kind of new at this stuff and she’s still going to make mistakes,” said Davis wrestling coach Ryan Bates. “She made one wrong move and the girl capitalized on it.”
Buckaloo rebounded with two straight victories over grapplers from Cache and Harrah. “It’s a big thing that she was able to lose her first one, still keep her composure and make it through the tournament without losing anymore,” Bates said. “I think it’s going to be beneficial for her as the season goes on.”
The Wolves lost 71-12 in their dual with Sulphur Jan. 12. Rance Digby and Mason Tomlinson were the only Davis wrestlers to post wins against the Bulldogs.
Wrestling at 190 pounds, Digby held a 10-5 advantage in the third period. He scored a pin over Garren Green with 1:42 in the match.
Tomlinson trailed throughout the second period in his 215-pound match against Kaden Prather. The junior reversed a 9-8 deficit and notched a pin with 1:39 remaining in the third.
Beyond that, Davis lost by forfeit at 113, 126 and 132 pounds. Sulphur recorded eight pins and one technical fall in the remaining nine matches.
“They’re good in the areas where we usually get our points,” Bates said of Sulphur. “It’s one of those things. It’s tough going into those matchups.”
Dalton Johnson was pinned by the Bulldogs’ Noah Heitland at 106 with 1:21 in the first period. Landon Jones pinned the Wolves’ Quaid Martin at 120 with 1:39 in the second.
Sulphur’s Baer Webb pinned Jett Jennings at 138 with 32 seconds in the first. Haiden Bridges trailed 12-6 in the second when he was pinned by Aspen Jolly with 41 seconds left in the second.
Ethan May suffered a tech fall to Maddax Mobley at 150. Dee Idleman was pinned with 20 seconds left in the first by Sulphur’s Kaleb Madron.
Jett Runyan pinned Luke Johnson at 165 with 1:01 in the second. Maverick Alexander was pinned by Austin Garrett at 175 with 55 seconds left in the first.
Kobe England lost at 285 to Justus Giliam in a pin with 1:45 in the first.
“We’re going to continue to get better and use it as a learning tool,” Bates said.
The Wolves sent 12 wrestlers to the Western Conference Tournament Jan. 13-14 at Kingfisher. Davis finished ninth among 22 teams with 97 points.
“I thought it was good for them,” Bates said of the tournament. “We went out and had some success. They came out and competed. They were ready to keep battling will help them improve.”
Dalton Johnson placed fourth at 106.
May went 2-1 and finished third at 144. His only loss at the tourney came to a state-qualifier from Mangum.
May trailed 8-7 when he was pinned with 30 seconds left in the match. The junior could get a possible rematch with the same wrestler at this week’s District Duals.
Luke Johnson was 4-1 and placed third at 165.
Bridges wrestled at 138, went 4-2, and finished fourth. Jennings competed at 138 as well, was 4-3, and placed sixth.
Idleman went 4-2 at 150 and finished fifth.
The Wolves will compete Jan. 19 in the District Duals at the Stephens County Fairgrounds in Duncan.
Buckaloo is scheduled to wrestle Jan. 21 in an all-girls tournament at Del City. 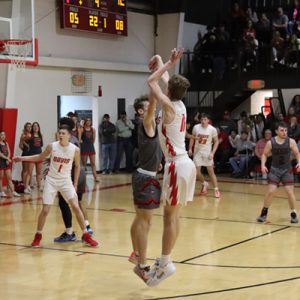