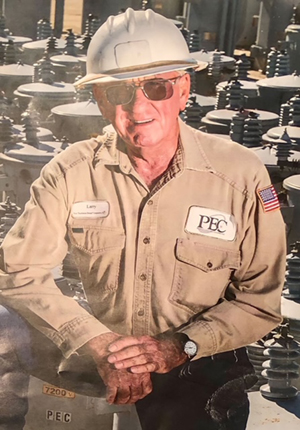 • George “Larry” Shellenberger passed away on Jan. 20, 2023, after a lengthy battle with Parkinson’s disease.
He was born Dec. 17, 1940, to William Love and Ruby Juanita Shellenberger. He was the older brother to Ann, Don and Doug. His father was a farmer and he helped his father and family take care of the farm. He was responsible for a lot at a young age, which lead to his strong lifelong work ethic.
His family moved to Stonewall when he was 15 years old. He met his future wife and lifelong friend, Elois Rae Sanders while attending Stonewall High School. They married on June 25, 1960, a couple of weeks after they graduated from high school together. As a young couple they moved to Ardmore where Larry worked for 7 Up Bottling Company as a route salesman. Then, he had the opportunity to apprentice with an electrician and not too long after he started work for People’s Electric Cooperative as a maintenance man.
In September of 1967 after many years of hoping and praying for a child, he and his wife adopted a beautiful four month old baby girl that they named Rae Ann. About a little over two years later, they were blessed again with the birth of their daughter Debra Lynn.
In 1972, PEC assigned Larry to the Sulphur and surrounding catchment area as a district line technician. He and Elois raised their daughters in Sulphur where they built their home on 14th Street.
Larry in addition to being a journeyman lineman also kept up his electrical licenses and wired their home and many others in his lifetime. He was known to the community as the PEC man and he was hardly ever seen not wearing his PEC cap.
His wife took care of children in their home, and those children and their families became an extension of his family. He became a father in-law to Tony in 1989 and he would tell anyone who would listen as to how proud he was of him. He became a grandfather in 1996 with the birth of his granddaughter Sydnie and again in 2001 with the birth of his youngest granddaughter Mackenzie. They called him Papa and believed he could fix about anything. He was known in the community to show pictures of his granddaughters and bragging to all he knew and some he didn’t about them. He loved being a lineman as reflected by his 53 years of employment with PEC and many recognitions, citations and awards.
He was preceded in death by his wife of 43 years, his parents, his younger brother and many beloved friends and family members.
He is survived by his daughters: Rae Ann Shellenberger of Sulphur, Debie Fidler and her husband Tony of Edmond, Okla. His granddaughters: Sydnie Edmonds and husband Joe of Ponca City, and Mackenzie Fidler of Norman. Larry is also survived by his sister, brother and brother in-laws and sister in-laws, nephews, nieces and many other friends, family and loved ones who loved him and will miss him dearly.
Funeral services will be held 10:30 a.m. Friday, Jan. 27, 2023, at Crossway First Baptist Church in Sulphur, with Pastor Bill Leveridge officiating.
Services are “Entrusted To” HALE’S Funeral Home of Sulphur, OK.
Online condolences may be offered at halesfuneralhomes.com.