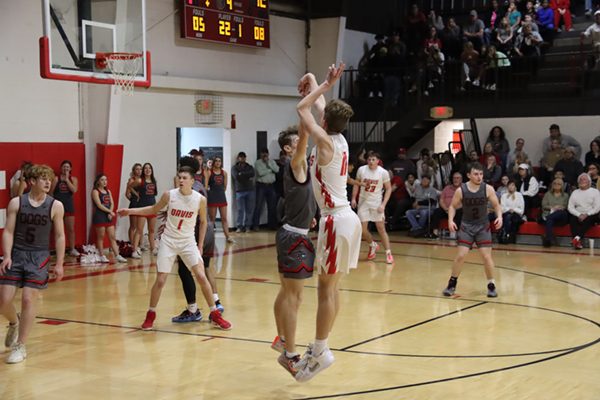 TRIPLE OVER-TIME. The Davis Wolves are the Murray County Basketball Bedlam champions in a history making triple over-time game. Dalton Hefley helped put 11 points on the board in the action-packed game with Wolves winning 59 to 55.

The Davis Wolves held their basketball homecoming ceremonies Jan. 17 then went out and was crowned Murray County Bedlam champions with a thrilling three-overtime win over Sulphur.
Davis led late in the fourth quarter and built leads in the first two overtime periods. A 9-5 advantage in the third overtime was needed to seal the victory for the Wolves.
“We’ll take a win over Sulphur any way we can get it,” said Davis head coach Dakota Blackwell. “The boys kept fighting, and with the morale from the bench, it kept everybody locked in.”
Sulphur earned a split in the series with its win over the Lady Wolves in the nightcap. Davis held a three-point lead going into the fourth quarter but were outscored 16-5 down the stretch.
“Another big game for us against another good team,” said Lady Wolves head coach Jeff Brown. “We played well enough for the first three quarters to give ourselves a chance, and for whatever reason, we had too many turnovers and too many missed shots in the fourth quarter.”
Senior Chloe Summers was named Homecoming queen for the 2022-2023 season.
Boys’ Game
Wolves 59 Sulphur 55 (3OT)
Sulphur jumped out to a 6-0 lead to start the game. The Wolves were held scoreless until 5:11 in the first on a Dalton Hefley layup.
Davis finished the quarter on a 5-0 run and tied the score at 10-10 at the start of the second. The Wolves committed 14 turnovers on 24 possessions in the first half.
Sulphur finished on a 7-2 stretch and led 19-16 at halftime.
“If you had told us that and we’d only be down by three, we’d felt pretty good about where we’re at,” Blackwell said of the deficit. “I thought we came out a little flat and we weren’t shooting it very well.”
Davis took its first lead of the game at 22-21 with 5:32 in the third. There were two ties and two lead changes for the rest of the period.
Braxton Griffin’s three at the buzzer put the Wolves in front 32-29.
Davis opened the fourth with a 6-1 run and led 38-30 with 6:13 remaining. The Wolves’ largest lead came at 42-32.
“Our defense was way better and we kind of just stuck with it,” Blackwell said. “We played pretty well and outplayed them.”
Sulphur answered with four straight points and trailed 42-36 with 1:26 left in regulation. Davis had opportunities to clinch the victory but missed two front ends of 1-and-1s in the final 42 seconds.
The Bulldogs’ Trace Todd and Davion Willis hit back-to-back 3s that sent the game to overtime tied 42-42.
“We’re still young and we’re still trying to learn how to play in certain situations,” Blackwell said.
Jake Parker began the overtime period with a steal and bucket for a 44-42 Davis lead. The two teams scored four points each in the first extended session and were tied at 44 and 46.
The Wolves missed three free throws, including a front end in the first overtime.
“We missed a lot of free throws there,” Blackwell said.
Parker put Davis back in front 48-46 with a bucket at the start of the second overtime. The two rivals were tied again at 48 and 50.
Tyson Moss completed a three-point play at the start of the third overtime and hit a bucket for a 55-52 margin. Wyatt Fielding’s two free throws extended the lead to 57-52.
Willis hit his second 3 to trim the lead to 57-55 but Parker’s two free throws with 12 seconds left secured the win.
“We had a chance to win at the end of every quarter and in overtime,” Blackwell said. “The good thing was we never trailed. Every time they responded, we responded right back and take the lead.”
“They (Sulphur) had momentum at the end of the fourth quarter and into each overtime,” Blackwell continued. “Our boys just kept fighting.”
Davis used a balanced attack in scoring against Sulphur. Four Wolves finished the game in double figures.
Parker and Moss scored 12 apiece. Hefley had 11 and Fielding added 10.
With the win, the Wolves are now 6-9 on the season.
Girls’ Game
Sulphur 37 Lady Wolves 29
Davis trailed 11-4 at the end of the first quarter but tied the score at 11-11 with a 7-0 run. The Lady Wolves then went scoreless the next 1:56 while Sulphur jumped in front 16-11.
The Lady Bulldogs held a 19-13 lead at halftime.
Mattie Morton scored the first six points of the third quarter that tied the game at 19-19.
The Lady Wolves limited Sulphur to two third-quarter points. The score was tied again at 21-21 late in the third  when Summers hit a 3 at the buzzer.
Sulphur started the fourth quarter with a three-point play that tied the score at 24-24. The game was tied again at 26.
“That was the big key for us, to keep them off the boards, which we did a pretty good job all night long,” Brown said. “We just had a bunch of easy shots we missed and turnovers.”
Davis committed 17 turnovers against the Lady Bulldogs, including seven in the fourth.
The Lady Wolves’ final lead of the night was 27-26 on Preslee Hunt’s 1-2 free throws with 4:36 remaining.
Sulphur regained the lead and finished the contest with a 10-2 run.
“We’ve had that happen to us about four or five times now,” Brown said. “We feel pretty good about ourselves going into the fourth quarter with a good chance to win and we just can’t get it done.”
Summers led Davis in scoring with 11 points. Hunt and Morton each had six.
The loss drops the Lady Wolves’ record to 7-8.
Davis returned to conference action Jan. 24 at Washington. The Wolves will visit Purcell Jan. 27.
Next week, Davis will travel to Lindsay Jan. 31 before hosting Marlow Feb. 3.
Boys’ Game Summary
Sulphur 10 9 10 13 4 4 5 – 55
Davis 8 8 16 10 4 4 9 – 59
Davis – Jake Parker 12, Tyson Moss 12, Dalton Hefley 11, Wyatt Fielding 10, Dakota Carter 7, Braxton Griffin 6 and Spencer Clinton 1.
Girls’ Game Summary
Sulphur 11 8 2 16 – 37
Davis 4 9 11 5 – 29
Davis – Chloe Summers 11, Preslee Hunt 6, Mattie Morton 6, Kensley Barnes 4 and Jacobi LaNoy 2. 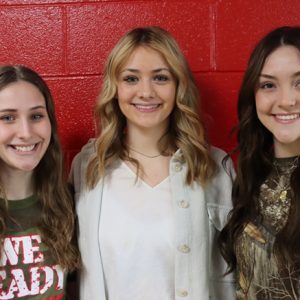