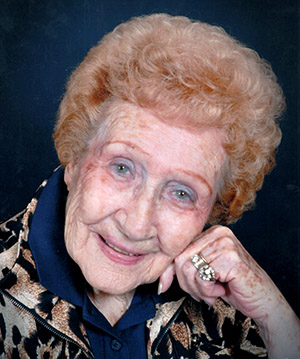 Billie June Holdridge, of Sulphur was born April 10, 1923, in Davis to Leonard Taylor and Anna Pauline (Richardson)  Birch. She died Feb. 20, 2021, in Sulphur at the age of 97 years, 10 months and 10 days.
Holdridge was raised in Davis and graduated from Davis High School in 1941. She married Buck Stephens in 1946. His military service gave them the opportunity to live in Japan during the Korean War. After 9 years of marriage, the couple had their only child Carl M. Stephens.
Holdridge worked for the National Park Service, and as an assistant to a local doctor. She later ran her own insurance company.
She married Ray Holdridge in 1972 and they developed and made their home in Holdridge Estates in Sulphur.
Holdridge is survived by her son, Carl Stephens of Madill; step-son, Mike Holdridge of Colorado Springs, Colo.; brother, Bob Birch, of Sulphur; sister,  Anna Ruth Birch, of Oklahoma City; 4 grandchildren; and Michael Stephens, of Oklahoma City; and 4 great-grandchildren.
Memorial Services will be held Tuesday, March 2, 2021 at 1 p.m. in DeArman Funeral Chapel officiated by Rev. Tom Hefley.
Arrangements by DeArman Funeral Home of Sulphur
Online condolences may be sent to www.dearmanfuneralhome.com
In lieu of flowers, those wishing to give an expression of sympathy are asked to consider the Oklahoma Medical Research Foundation, 825 NE 13th Street, Oklahoma City, OK 73104.