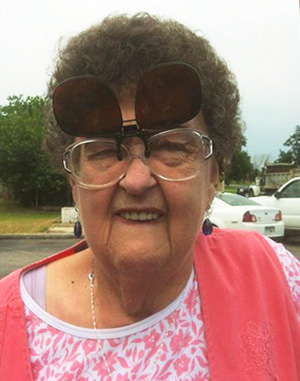 Barbara Joan “Babs” Oglesby was born July 15, 1942, in Shreveport, La., to the late W. P. and D. Floread (Timmons) Mabry. She died June 1, 2021, in Ardmore, at the age of 78 years, 10 months and 16 days. Babs and Gordon A. Oglesby were united in marriage on Sept. 21, 1966, in Shreveport. He preceded her in death on Dec. 1, 1990.
Babs grew up in Shreveport. Following her graduation from Fair Park High School, she attended Dallas Christian College and later attended Shreveport Trade School. She spent several years working as a Nurse’s Aide. On June 1, 1978, she and Gordon moved to Davis, where he pastored at the First Christian Church. While living in Davis, Babs worked in childcare, as well as, with the Foster Grandparent Program at the Davis Elementary School, assisting students with their reading skills.
Babs was a very friendly, loving individual, all while maintaining a stern demeanor. She enjoyed her weekly trips to the beauty shop, not only for getting her hair done, but also to visit with her friends. For many years, she was very active with the First Christian Church, where she taught Sunday school classes. In earlier years, Babs was a member of the Oklahoma TOPS club, where she was selected as queen in 1979.
Survivors include one sister, Linda Kincaid and husband Bill of Shreveport; three nieces, Flo Woods, Esther Sachse and Dorcas Williamson; Tatiana Wilson, whom she revered as her beloved granddaughter; as well as several great nieces and nephews and great-great nieces and nephews.
In addition to her parents and husband, Babs was preceded in death by two sisters, Billie McGuire and Bette Jo Mabry; and one brother, James A. Mabry.
A graveside service was held on Friday, June 4, 2021, at the Green Hill Cemetery in Davis with her brother-in-law, Reverend Bill Kincaid officiating.
Services were entrusted to Hale’s Funeral Home of Davis.
Online condolences can be offered at halesfuneralhomes.com.