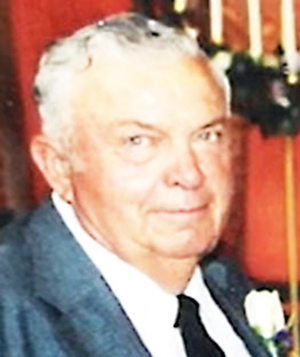 Funeral Services for Royce McGee will be held at Hart-Wyatt Funeral Home Chapel in Walters, Okla., Wednesday, Feb. 23 at 10 a.m. with Joseph Woods officiating. Memorial donations can be made to the Walters Cemetery Association, P.O. Box 485, Walters, OK 73572.
Royce McGee was born to Elis F. and Eva Bernice (McCrary) McGee on Sept. 14, 1929, at Grandfield and departed this life in Marlow on Feb. 19, 2022, at the age of 92 years, 5 months and 5 days.
Royce grew up in the Ahpeatone Community west of Walters. He graduated from Ahpeatone High School in 1947 and went on to attend Cameron College. Royce married Edna Eloise Peery on Sept. 1, 1948, in Walters and to the union a daughter was born. The couple made their home 15 miles west of Walters where they were engaged in farming and ranch. In 1980, they built a house just northwest of Walters, but soon moved their farming and ranching operation to the Arbuckle Mountains at Davis in 1985. Edna preceded him in death in 2014 and in 2016 he moved to the Duncan area to be near his daughter and family.
Royce was a longtime member of Ahpeatone Baptist Church. He enjoyed raising cattle, taking care of his girls, and he and Edna enjoyed trips to Branson. Through the years he served on the Ahpeatone and Chattanooga School Boards and the Chattanooga Coop Board along with serving many years on the Walters Bank and Trust Board.
He was preceded in death by his parents; his wife, Edna; his daughter, Sue King; and 3 sisters, Faye McCoy, Oleta Turner and Joy Hudman;
Royce is survived by his granddaughter, Amy Wilson and husband Chris of Ninnekah; his great granddaughters, Alexis and Aubrey Wilson of Ninnekah; his son-in-law, Ronnie King of Lawton; his sister, Nelda Bivens of Wichita Falls, Texas; nieces, nephews, other relatives and friends.